Barcelona on brink of La Liga title after Real slip 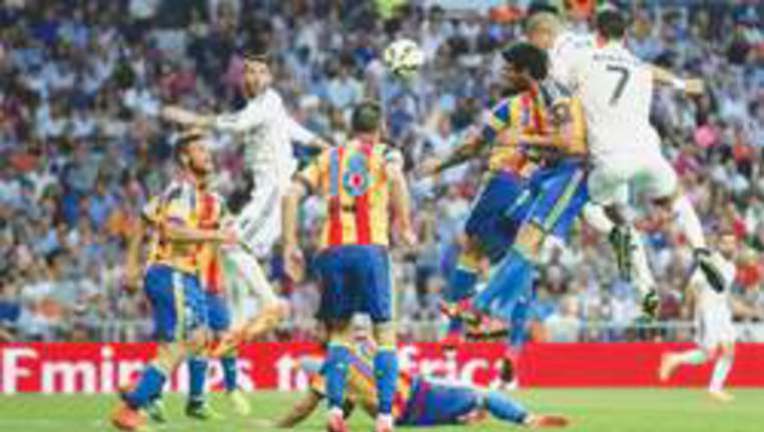 MADRID: Real Madrid’s hopes of overhauling La Liga leaders Barcelona suffered a stinging blow when Cristiano Ronaldo missed a penalty in a 2-2 home draw to Valencia on Saturday to slip four points behind their arch rivals with two games left.

Treble-chasing Barca had earlier secured a nervous 2-0 victory at home to Real Sociedad and Real’s stumble capped a superb week for the Catalan giants after Wednesday’s 3-0 drubbing of Bayern Munich put them on the brink of a place in the Champions League final and they are just one win away from clinching a 23rd La Liga title.

Real, by contrast, are facing the real possibility of elimination from Europe’s elite club competition following the holders’ 2-1 defeat at Juventus in their semi-final, first leg.

Barca, through to the Copa del Rey final against Athletic Bilbao at the end of the month, play their return match at Bayern on Tuesday while Real’s best chance for silverware this season depends on them overturning the 2-1 deficit when they host Juve on Wednesday.

Barcelona can dethrone Atletico Madrid with a win at the Vicente Calderon in the next round. If, and when, that match is played remains to be seen.

The final two rounds are in doubt after the Spanish football federation (RFEF) announced it was suspending all matches from next Saturday in protest at a proposed law regulating the sale of broadcasting rights.

Valencia raced into a surprise 2-0 lead at the Santiago Bernabeu through goals from Paco Alcacer and Javi Fuego before Ronaldo had a penalty saved by goalkeeper Diego Alves on the stroke of halftime.

Ronaldo, Gareth Bale and Javier Hernandez had earlier struck efforts against the frame of the goal and Real’s Germany midfielder Toni Kroos had to be replaced by Asier Illarramendi because of a suspected muscle injury.

Pepe pulled a goal back for Real with a header from a corner 11 minutes into the second half and Isco levelled with a superb curling shot six minutes from time but Valencia held on in an action-packed finale.

“We didn’t start the game well but we played a great second half,” Pepe told Spanish television. “If we play like that against Juve we will get through.”

Real boss Carlo Ancelotti, meanwhile, refuted suggestions the result could be a blow to his side’s confidence ahead of their crucial clash against Juve.

“The result isn’t good, but the performance was the complete opposite. We have a lot of chances, hit the post three times, missed a penalty, sometimes it just isn’t enough,” said the Italian. “We have a lot of positives from the game and if we play like that on Wednesday it will go well.”

Barca have 90 points, with Real on 86 and champions Atletico in third on 77 after a 2-2 draw at Levante on Sunday. Fernando Torres scored with 10 minutes left to salvage a point for Atletico who moved four points ahead of Valencia.

Sociedad were fortunate to escape a scoreless first half the Nou Camp, but Neymar broke through in the 51st with his 35th goal of the season after Lionel Messi’s pass was headed on by a defender for the Brazilian to nod home.

Substitute Pedro Rodriguez netted from an acrobatic bicycle kick to secure the points with five minutes left, in a rare moment to shine for the forward who has spent most of the campaign on the bench.

“These three points were vital,” Barcelona coach Luis Enrique said. “The outcome was never in doubt. My players never let up for even a second.”

Barca’s 1-0 loss at Sociedad in January marked the low-point of the Catalan’s season but since then, they have won 28 of their last 30 games.

“It was predictable that we would drop our rhythm [after the Bayern victory] but we wanted to win at all costs,” Neymar told Spanish television.

“Sociedad are a great team and we knew it would be tough.”