Karachi City of Lights festival brings a glow to arts 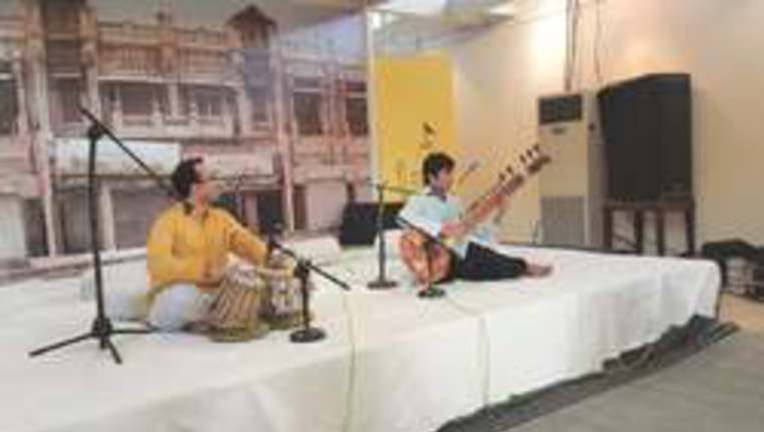 KARACHI: With temperatures rising in the city, it wouldn’t be surprising to see only a few leaving their homes to attend any event but by the evening considerable number of people had gathered to see the public space luminous with art installations and performers entertaining audiences.

A joint effort of the Citizens Archive of Pakistan (CAP) and ‘I AM Karachi’, the Karachi City of Lights Festival brought a glowing radiance to performing and visual arts at the Fomma Trust-Art Centre at Zamzama Park on Friday.

CAP’s executive director Swaleha Alam Shahzada shared that the aim of the festival was to give room to tolerant activities through arts.

“Our aim is to see a Karachi which was once tolerant and peaceful but then very quickly it all changed. I saw Karachi go from a very lovely and peaceful city to curfews, riots, political parties, etc. I lived through that era and the 80s changed the city completely, economically, politically, socially and most importantly, morally. The purpose of this exhibition is not only to promote a more forbearing Karachi but to encourage the youth that it is up to them to take the ownership.”

She added that the fear residing in the hearts of people needed to end as well. “We only want to impart tolerant and peaceful values. The reason of interactive sessions is to prove that people can talk to each other politely. You can sit in a room with strangers and listen to music and enjoy theatre, and it doesn’t matter if the person sitting next to you is from any other religion, sect or ethnicity. We need to learn how to live together.”

Starting off with the National Academy of Performing Arts (Napa)’s Kahani Walay, the festival, which held visual and performing arts simultaneously in the premises of the park and centre, saw the attendees huddle together to find a spot when Yousaf Kerai and Shehroze Hussain sat for their performance of tabla and sitar.

Instead of a typical session of playing the tunes, the duo discussed major and minor notes in music upon which all harmonies depend. The crowd, including children, responded to Kerai and clapped to the music with almost everyone in awe of the 17-year-old prodigy Hussain.

“This performance will take the listeners to a journey through South Asia. The tunes will not only be from Pakistan alone but they will also echo the melodies of Bengal, Kashmir and India,” said a soulful Kerai.

The improvised theatre titled Two Views of a Bridge by Platoon perhaps drew the largest crowd as the audience laughed heartily to the jokes cracked by the young artists in both English and Urdu, ranging from water issues, mobile snatching and relationships.

The visual arts set up at different points in the venue saw many inspecting the installations as some of them like CAP’s oral histories took them back to the days when Karachi’s streets were washed daily.

With more than 10 projects placed everywhere, a striking installation ‘12 Seconds’ by artist Marvi Mazhar centred on the traffic signals and different intersections was a remarkable effort to highlight the uncertainty in the city.

Explaining the idea behind her work, Mazhar said: “The idea revolves around 12 seconds when you have to stop at the signal and the uncomfortable feeling that comes over leading many to rush as soon as it is opened which symbolises an organised movement to a disorganised one. Chowks are point elements, we refer to them all the time like, Teen Talwar or when an unfortunate incident happens, we say ‘let’s meet at Press Club and move to Numaish’. It is an important element as to how the signals and chowks are related. The composition is all about layering and defines Karachi as it is a cube whose corners do not meet just like the city we live in which is growing organically.”

Photographer and artist Tapu Javeri, whose photography exhibit Karacchakra was displayed as well, said that it was a collage of different buildings in a cyclic formation. “I added roses and chai because they are inseparable from Karachi. It represents a journey around the city.”

Lauding CAP’s efforts, Mr Javeri added that with Karachi evolving rapidly the work done by the organisation should be hailed because preserving history is extremely important.

Artist Maliha Hasan Gazan’s work ‘Happy Buggy Ride’ portrayed buggy owners who reminisced about the olden times, through audio recordings arranged alongside their pictures, when the worth of a horse carriage was high and the customers valued the drivers. CAP mobile museums imparting historical facts about sites like Mohatta Palace, Karachi Zoo among others were also erected at different points in the park with interactive activities for children.

The festival stretches over three days and ends on June 7.