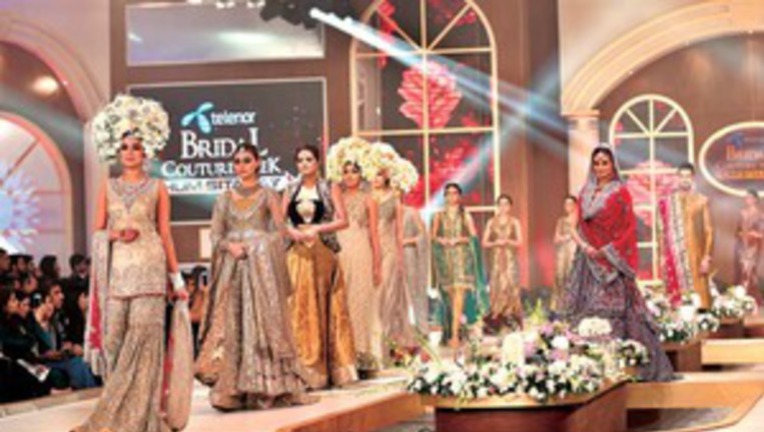 ‘Royal Glam’ by Lajwanti created a lot of drama on the ramp with metallics in subdued earthy tones on a base featuring traditional festive colours in flared outfits. The collection did not stray from its ethnic roots and was for the bride who takes pride in wearing something traditional on her big day.

Humayun Alamgir scored a touchdown with his menswear collection which appeared both classy and comfortable. Titled ‘Shehnai’, it had all the classic sherwani cuts and was divided into two distinct categories of gold and velvet. Actor Imran Abbas wore the showstopper outfit.

Anees Malik’s jewellery and clothes in his ‘Ardhangni’ (better half) collection were inspired by Akhtar Jawad’s poem about newlywed women who undergo a personality change by becoming the other half as they depart to start a new life while adorned in all their finery and jewels. The segment featured necklaces, earrings and various pieces of finely crafted jewellery for the modern, glamorous bride. Model Rizwan Ali performed for the designer.

Teena by Hina Butt’s ‘The Royal Majesty’ was an amalgamation of Victoria era cuts and silhouettes with deep necklines in vintage gowns for the modern woman looking for adventure and romance. It borrowed strong influence from the artistic works and intricate palatial architecture of the era.

Rani Emaan attempted to infuse orientalism with modernism. “This signature line celebrates the essence of classicism in which Greek architecture has been the subject of inspiration,” stated the designer.

Classic patterns from the temple of Zeus and Greek columns fused with modern artistic shapes provided the basic design inspiration. She attempted to give floral as well as architectural designs a 2D or 3D effect via protruding embroidered objects on the fabric. Singer Amanat Ali performed during the show.

‘Pastel Dreams’ by Maria B delivered on the promise of being “modern, chic and a trendy assortment of clothes ideal for a non-fussy marriage of today”. Delicate embroidery and sleek looks defined the Maria B bride with pastels and subtle shades. In all, the collection ticked all the right boxes when it came to being light, sparkly and glamorous. Quratulain Baloch performed for Maria B in a showstopper creation.

‘Couture 2016’ by Saira Rizwan focused on bridals in deep reds, black and burgundy with traditional embellishments and silhouettes.

Popular brand Almirah chose to show Mughal design influences in kurtas, vests, sherwanis, chooridars, Jodpuri pants, turbans and footwear featuring fine hand embroidery such as zardozi and silk thread work infused with crystals. It was a collection fit for a king. Cricketer Wahab Riaz walked in this segment as the showstopper.

The finale show ‘Sar-i-Sang’ by Sobia Nazir was inspired by extravagantly detailed royal jewels. Swarovski elements were used along with sequins and threadwork to create a dazzling effect on outfits crafted in net, organza and velvet. There was a visible play of texture that highlighted the brilliance in artistry to create a line that spoke of modern elegance. Armeena Rana Khan was Sobia Nazir’s choice to display her showstopper outfit.