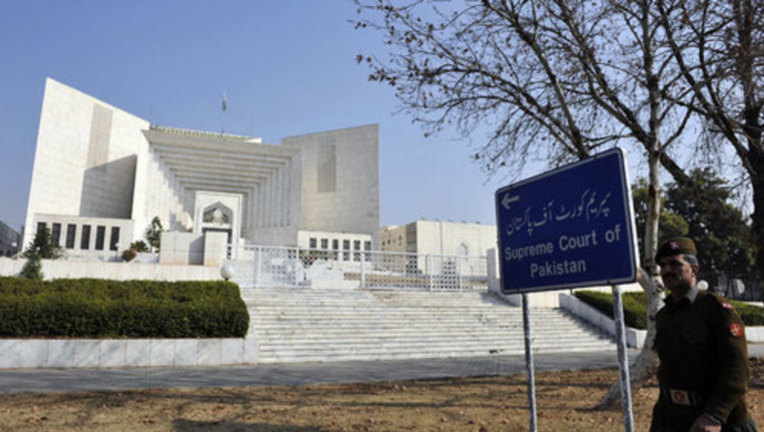 ISLAMABAD: Supreme Court Bar Association (SCBA) President Ali Zafar, after his meeting with Chief Justice Anwar Zaheer Jamali on Monday, cast doubts that the CJP is not likely to constitute a judicial commission to probe the Panama leaks.

"I am not sure whether the chief justice will constitute a judicial commission to probe Panama Papers or not," Zafar said while talking to media after meeting Zaheer Jamali in his chamber.

Advocate Zafar said he discussed the issue of Panama leaks with the chief justice and the letter sent by the PML-N government for constituting a judicial commission in this regard.

"The chief justice did not give any assurance on the issue and in my opinion the Supreme Court is not going to entertain the letter sent by government," Zafar added.

The SCBA president said “issue of Panama leaks has been made so controversial by the political parties that the apex court is reluctant to pursue the matter”.

The chief justice is to decide on the request for the formation of a judicial commission to probe the Panama Papers leaks.

The CJP is expected to consult other judges before making any decision regarding the commission requested by the government.

Prime Minister Nawaz Sharif in his state address had announced the writing of a letter to the chief justice to investigate allegations made against the premier's family in wake of the Panama Papers leak.

Soon after the announcement, the government issued an SRO under which a three-man commission under Section 3(1) of the Pakistan Commission of Inquiry Act, 1956 is appointed.

The SCBA president had earlier termed the commission a powerless body because it had no power to conduct investigation in foreign lands.

His view was endorsed by former additional attorney general Tariq Khokhar who believed that the leaks scandal could not be investigated meaningfully in Pakistan because the material evidence was mostly in Panama.

“It is beyond the realm of possibility to expect anyone from Pakistan to probe in Panama, which being a sovereign state, is not legally required to render any assistance to a Pakistani commission,” he said.

But Pakistan Bar Council Vice-Chairman Farogh Naseem was of the opinion that the commission could appoint any panel with a direction to go abroad and seek evidence.