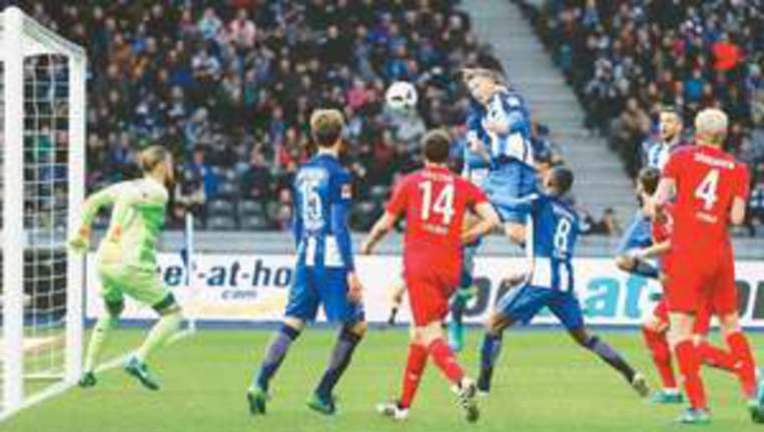 BERLIN: Borussia Dortmund salvaged a 3-3 draw at lowly Ingolstadt, while Hertha Berlin kept its dream start going by moving joint-top in the Bundesliga on Saturday.

Christian Pulisic, a second-half substitute, scored one and set up another to prevent Dortmund from slumping to their third defeat of the season.

He prodded home the equaliser from close range in the last minute after Orjan Nyland saved Lukasz Piszczek’s initial effort.

Meanwhile, Hertha defeated previously unbeaten Cologne 2-1 in a hectic game at home to move level with Bayern Munich on 17 points.

Only four days after their Champions League win at Sporting Lisbon, Dortmund were 2-0 down in the first half with goals from Almog Cohen and Dario Lezcano.

Forward Pierre-Emerick Aubameyang cut the deficit in the 59th minute with his seventh goal of the season but the hosts struck back less than a minute later, again with Paraguayan Lezcano.

Last season’s runners-up battled back, with Adrian Ramos giving them hope once more with his 69th minute goal and American teenager Pulisic rescued a point for them.

The result left Dortmund in sixth place on 14 points.

Vedad Ibisevic fired Hertha into an early lead after a fine run and cross from Mitchell Weiser.

Anthony Modeste grabbed the equaliser with his league-leading eighth goal of the season in the 65th but Niklas Stark grabbed the winner less than 10 minutes later for the high-flying home side.