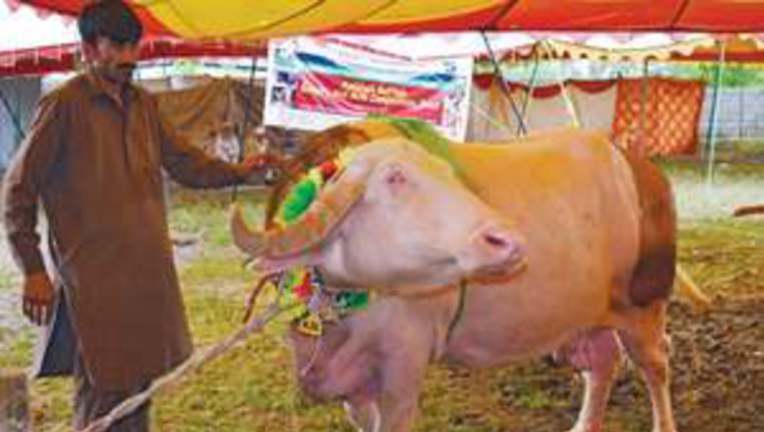 MINGORA: The local farmers and owners of cattle participated enthusiastically in Azikheli buffalo beauty and milk competition and hoped that the event would be held every year.

The three-day competition, held for the first time in Swat, started on Saturday. The event was organised by International livestock Research Institute and Agriculture Innovative Programme (AIP) for Pakistan in collaboration with provincial livestock and dairy development department and Agricultural University, Peshawar. It was funded by USAID.

Azikheli Buffallo is only found in Swat. It can live in cold weather. About 200 Azikheli buffaloes from different parts of Swat took part in the competition. Three types of buffaloes -- Nili Rawi, Kundhi and Azikheli -- are found in Pakistan that are mainly raised for milk production and meat.

The main objective of the competition is to encourage promoting buffalo breeding in this part of the country.

The competitions were held in four categories including beauty, milk production, bull and calf. The owners of the top six winners were awarded with cash prizes and livestock stuff along with certificates.

“Unfortunately, little is known about Azekheli buffalo. It is called Azekheli as it found only in Azikhel area of Swat. It is red and white in colour. It can produce up to 20 litres of milk a day. It can live in cold areas like Swat, Gilgit-Baltistan and Quetta,” said Dr Nadar Khan, one of the organisers of the event.

Dr Mohammad Nawaz Ibrahim, the country representative of International Livestock Research Institute, Pakistan said that it was for the first time that the beautiful looking buffalo was exposed even within Pakistan.

“The Azikheli buffalo has very specific adaptation of the hilly areas and cold weather. Unlike other breeds of buffaloes, it can survive in muddy and cold conditions. For the first time we collected data in Swat and found that 1,300 households keep Azikheli buffalo,” he told Dawn.

The owners of the cattle said they were dependent upon their buffalos and the event encouraged them to promote and increase that breed.

Laiq Badar, whose buffalo got first position in milk and beauty competition, told Dawn that he was excited when he learnt about the result.

“I have 10 buffaloes of the same breed which are the source of our livelihood. Today, I am proud that my buffalo won the first prize,” he said. He added that such events should be organised annually so that the breed could be promoted.

Experts at the competition said that the Azikheli buffalo was not only beautiful but it also produced more milk and better meat.