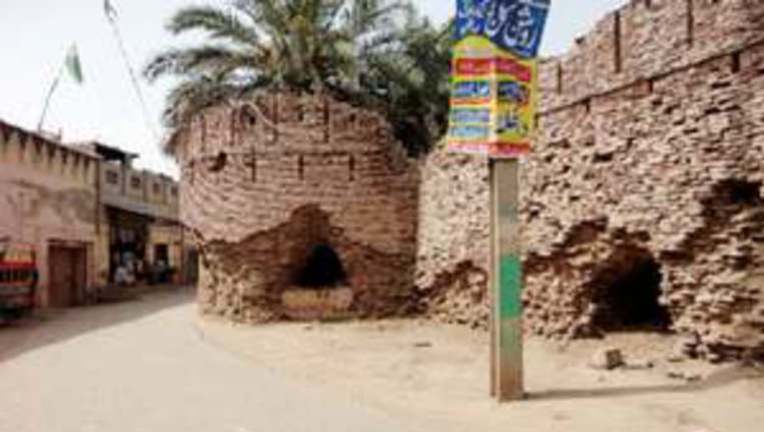 MULTAN: The fort of Tulamba has survived many invaders for more than 2,500 years, according to legend; it is, however, now caving in to the apathy of the authorities.

According to legend, Tulamba existed even at the time of Noah; it was also invaded by Alexander.

The small, sleepy town of Tulamba is located between Mian Channu and Abdul Hakeel in Khanewal district, on the eastern edge of the Ravi River.

“Tulamba was under the rule of Malohi tribe of Jatt people when Alexander attacked it but faced strong resistance from the Malohi tribe who were brave and courageous,” says researcher and writer Mehboob Tabish.

He said several forces invaded the town due its geographical location as the forces coming from north and west had to pass through the town while going to Multan.

The people of the area speaks Rachnavi dialect of Seraiki, which is also referred as Jaangli.

He said that a brief archaeological excavation showed the town was about 3,000 years old. The coins of several periods were discovered in the excavation.

The Tulamba fort is located in the middle of the town and it was reconstructed by Sher Shah Suri.

“Founder of Sikh religion Guru Nanak (1469-1539) visited the town during his first out of seven journeys (Udasis). The seventh Sikh spiritual master, Guru Hari Rai (1630-1661), sent a preacher to Tulamba to spread the Sikh religion,” he said.

Now, a girls’ high school and the offices of town committee have been functional on the premises of the fort for years. The fort has 12 bastions, supporting the grand fortification wall. The whole construction has been done with mud mortar in three different burnt brick tile sizes.

Both exterior and interior sides of the middle portion of the damaged fortification walls of the fort have been repaired with bricks of different sizes and broken pieces of bricks which gives an ugly look to the entire structure.

The foundation of the fortification wall and the upper portion above the height of 15 feet, including merlons, are still in original tiles.

Several people have occupied the major portion of fortification wall and bastions which hinders the sight of the portion and makes it difficult to assess damage to the portion. Encroachments have been made by both the government and private people.

Punjab Archeology Department in charge Malik Ghulam Muhammad said the monument was not protected under the Punjab Special Premises Act, 1985.

“The preservation of the monument can be done if funds are provided to the department,” he added.