Three-day Sufi festival gets under way in Hyderabad 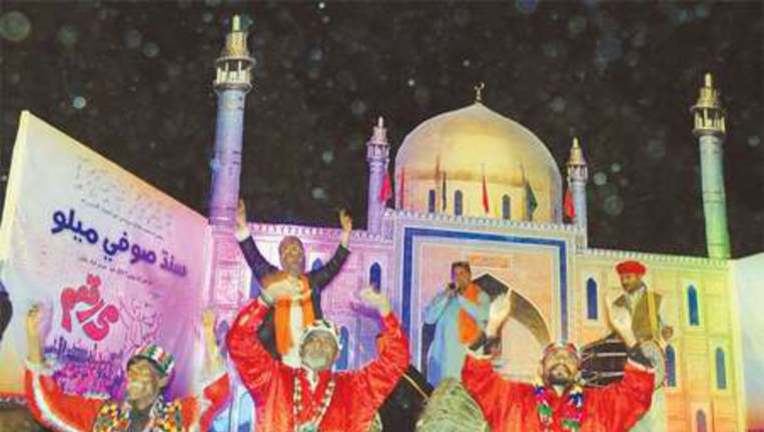 The festival, organised by the provincial auqaf department, was originally to be inaugurated by Chief Minister Syed Murad Ali Shah but he could not turn up owing to his preoccupations.Senator Aajiz Dhamra, Auqaf Minister Ghulam Shah Jillani, PPP Hyderabad district president Saghir Qureshi and information secretary Ahsan Abro were among the prominent figures who were present. They attended and enjoyed the Sufi raag and other segments at the festival.

Speaking at different sittings, Mr Khuhro said: “Sufis have the ability to differ with each other ... Sindh takes pride in being the land of Sufis”.

Appreciating the auqaf department for organising the festival, the minister said that mysticism had the potential to counter extremism and terrorism and the festival would help achieve the objective.

One of the main features of the first day of the festival was a session on Tassawaf aur amn-aalam” (mysticism and global peace). Speaking at the segment, Khawaja Karim Korejo, the caretaker of Khwaja Ghulam Fareed shrine, said that Fareed was the last classical Sufi of the region; he had strong inspiration from Shah Abdul Latif Bhitai and Sachal Sarmast.

He said that message of mysticism was quite strong in the world and the message would get stronger in Pakistan as well. He described Sufis as ‘ambassadors of peace’ who talked about their motherland. Writer Noor Ahmed Jinjhi said that Bhitai promoted common’s language and his message had special significance in today’s era. He said that Bhitai’s poetry was in fact just natural. He said that Bhitai had encouraged man to prove his commitment with motherland. Bhitai could not be confined to one single thing because he emphasised the need for understanding the universe, he said, adding that it was mysticism that helped man to understand mankind.

Masood Lohar said that shrines held special place in Pakistan and mystics created the capacity to talk and listen to others. He said that wrong interpretation of religion created problems.

Lohar said mysticism preached tolerance and peace, and observed that mysticism and mystics had also been misused.

Raagis of Bhitai presented his raag while performers presented mystic and Rumi dance to enthral the audience.