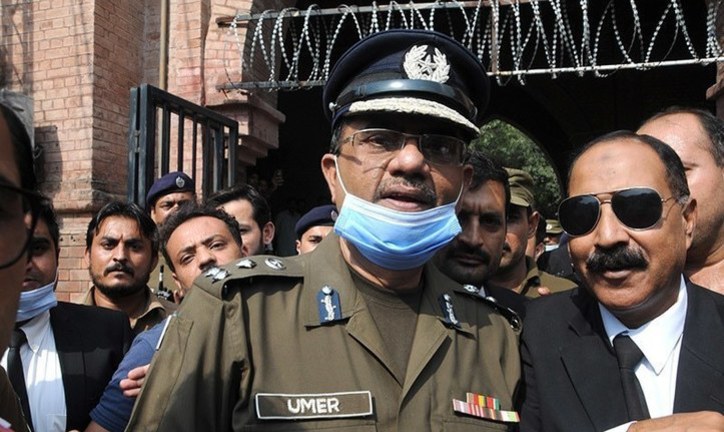 LAHORE: Sparking yet another controversy in the police department, Lahore Capital City Police Officer Umar Sheikh on Thursday issued orders for the arrest of Crime Investigation Agency SP Asim Iftikhar following a ‘heated argument’ during an official meeting called in the wee hours at the Safe City Authority headquarters. However, later Mr Sheikh withdrew the arrest orders on the intervention of his senior colleagues.

As per sources, the situation turned ugly when the CCPO reportedly lost his temper during the meeting, directing Civil Lines SP to lodge a case against his colleague Asim Iftikhar under section 155 (C) of the Police Order 2002 .

Before the situation got worsen, the senior police officers present in the meeting intervened and mediated between the two senior officers.

However, the sources said, Mr Umar forced the CIA SP to leave the meeting venue, saying his services were no more required for Lahore police.

There are also some unconfirmed reports of a “scuffle” between the two officers when the CCPO “held the CIA SP from his collar”.

Earlier, the Lahore CCPO reportedly also accused the senior police officers present in the meeting of having a “soft corner” for the opposition party PML-N.

The situation remained tense till the meeting concluded at 3:30am, an official privy to the information told Dawn.

He said the incident has alarmed other divisional SPs and officers working under the command of the CCPO because of his ‘aggressive attitude’.

He said the main concern of the officers was that Mr Sheikh had started treating senior police officers like his junior subordinates, against whom he had been taking ‘unwarranted’ punitive steps, getting as many as 10 of them booked or arrested, since he assumed Lahore CCPO’s charge.

About the latest incident, he said the meeting was called by the CCPO in connection with the Friday (today’s) public meeting of the opposition alliance the Pakistan Democratic Movement (PDM) being held in Gujranwala and the political parties rallies originating from Lahore for participation in the event.

All the divisional SPs of the operations wing were called in the meeting, besides DIGs of investigation and operations wings – Shahzada Sultan and Ashfaq Ahmad Khan.The official said the incident occurred when Mr Iftikhar got late for the meeting because of some “health issue”.

He said as the meeting began, the CCPO noticed Mr Iftikhar’s absence and on inquiring, he was told that the CIA SP could not attend the meeting as he was suffering from fever.

The CCPO asked his staff to contact the SP on his mobile phone. On being contacted, the SP told Mr Sheikh that he had requested him to excuse him from the meeting as he had temperature.

The official said the CCPO turned down his request and directed him to attend the meeting at any cost due to sensitivity of its agenda.

However, the CIA SP joined the meeting a little bit late which annoyed the CCPO, who reportedly passed insulting remarks about him in the presence of his other colleagues and senior officers.

The official said the SP requested his boss not to treat him like that, after which the CCPO got more flared up and reportedly shouted at him, saying “I would get you arrested”.

At this, the SP retorted that the CCPO should not treat him like a constable.

This led CCPO to order Civil Lines SP Safdar Raza Kazmi to arrest Asim Iftikhar and lodge a case against the SP, the official said.

He added that the CCPO also directed the officials present there to withdraw the gunman and other staff at the disposal of the CIA SP on charge of ‘disobedience’.

However, the senior police officers present in the meeting immediately intervened and tried to calm down both of them. The SP then left the meeting venue, he added.

Talking to Dawn, Mr Sheikh confirmed the incident, saying Asim Iftikhar violated ‘discipline’ and he had sent his recommendations to Punjab Inspector General of Police Inam Ghani for the suspension of CIA SP with immediate effect.

“When he [Mr Iftikhar] was contacted on my direction, he made an excuse of temperature,” the CCPO said.

He said the SP, despite his standing instructions, didn’t attend the important meeting and deliberately switched off his cell phone that prompted him to take strict action against him.

“I have withdrawn the order of arresting and lodging a case against him [SP] on the intervention of the DIGs present in the meeting”, he said while answering a query of this reporter. However, the staff and the police van had been withdrawn from the CIA SP, the CCPO said.

To another question, the CCPO made it clear that his action against Asim Iftikhar had nothing to do with the arrest of the motorway gang-rape case suspect Abid Malhi.

The CIA SP, however, refused to comment on the incident when this reporter contacted him for his stance in this regard.

Its not the first incident that Mr Sheikh sparked a controversy by allegedly misbehaving with his subordinates. A former station house officer (SHO) of Gujjarpura police station had accused Lahore CCPO of using abusive language against him over an official matter. The CCPO had not only suspended the SHO from service, but also had him arrested. However, he was later granted bail by a court after which he moved sessions court that asked the IGP to conduct a probe into the matter that was pending decision.