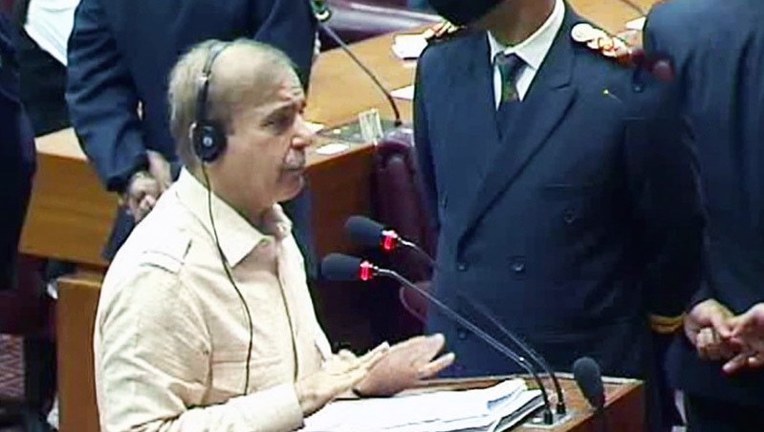 National Assembly Speaker Asad Qaiser adjourned on Wednesday the assembly minutes after it started as treasury members continued their protest for the third consecutive day to disrupt Leader of the Opposition in the National Assembly Shehbaz Sharif's budget speech.

Surrounded by sergeants, Shehbaz tried to deliver his speech amid sloganeering from the treasury benches but was cut short.

Meanwhile, Qaiser repeatedly called on the parliamentarians to be seated, but eventually adjourned the session after an object was thrown at the speaker's dais.

He ordered for whoever had thrown the object to be escorted from the House and said he would take action against the individual responsible.

"I will not conduct this House (NA) until both the government and the opposition [settle their matters]," said Qaiser before walking out, adjourning the session till tomorrow.

Shehbaz, during his speech, condemned yesterday's incident and said it was Qaiser's duty to maintain the sanctity of the House and run it in accordance with the law.

"I want to inform that it was the decision of our party and the opposition that if the opposition's speeches were peacefully listened to then we would reciprocate and listen to the leader of the House's speech," he said, adding that Qaiser had failed to keep the treasury members in check over the last two days.

"I am saddened by your helplessness," he said, alleging that the behaviour of treasury members had been sanctioned by Prime Minister Imran Khan himself.

Earlier today, the speaker had barred seven MNAs, including three from the PTI, from entering the House after budget books and expletives were thrown during yesterday's session.

A separate statement issued by the NA Secretariat said that the ban on the MNAs would last until further orders. "The NA Secretariat has issued instructions to the concerned MNAs and to the assembly security," it said.

The decision came after the NA turned into a battleground on Tuesday as the opposition and treasury members scuffled with each other and threw budget documents and books when the latter continued their noisy protest to disrupt Shehbaz's budget speech for a second consecutive day.

Qaiser suspended the proceedings of the House three times when the treasury members, led by some of the senior ministers who had come directly to the House after attending the weekly cabinet meeting, refused to pay heed to his directives to stay calm and kept on sloganeering, whistling and desk-thumping. Meanwhile, Shehbaz, who was surrounded by his party members to avoid any physical contact with the treasury MNAs, also continued his speech.

Meanwhile, the Associated Press of Pakistan reported that the speaker had sought six names each from the opposition and treasury benches for a parliamentary committee that would decide conduct for budget sessions.