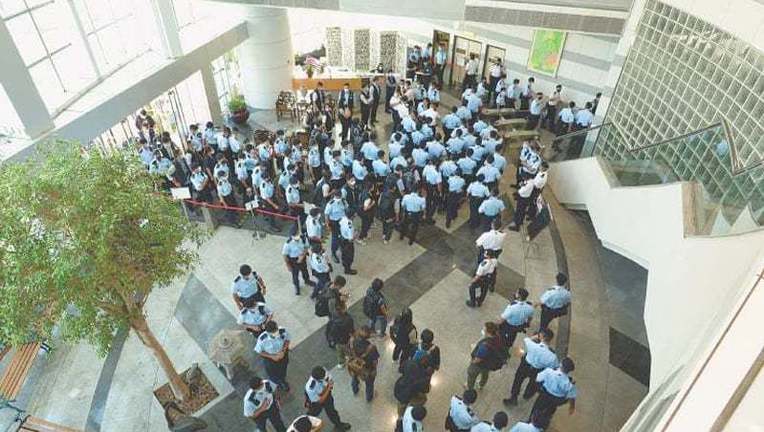 The paper and its jailed owner Jimmy Lai have long been a thorn in Beijing’s side with unapologetic support for the financial hub’s pro-democracy movement and scathing criticism of China’s authoritarian leaders. More than 500 officers conducted a dawn operation which authorities said was sparked by articles Apple Daily had published “appealing for sanctions” against Hong Kong and China’s leaders.

It is the first time the content of media reporting has sparked arrests under the city’s new national security law.

In a message to readers, Apple Daily warned that Hong Kong’s press freedoms were “hanging by a thread” but the paper vowed to “stand tall”.

Its union described the operation as a “wanton violation of press freedom” that “displayed how much police power has inflated under the national security law”.

Police said the five executives were arrested for collusion with a foreign country or external elements “to endanger national security”.

“They have overall responsibility for the content, style and principles of news reporting,” senior superintendent Steve Li told reporters.

Authorities also seized HK$18 million (US$2.3 million) in Apple Daily assets, the first time a national security law seizure order has been made directly against a Hong Kong media company, rather than an individual.

Hong Kong is historically a ma­­jor international media hub but its press freedom ranking has slip­ped dramatically in recent years.

Secretary for Security John Lee declined to say which articles breached the security law or whether those who shared the articles online, bought Apple Daily or its shares might be at risk. “Everyone must decide for themselves,” he told reporters.

“Our actions are not targeting press freedom or journalistic work,” he added. “We target perpetrators who would use journalistic work as a tool to engage in acts that endanger national security.” Sharron Fast, a lecturer at the University of Hong Kong’s journalism school, described Lee’s comments as “ominous and incorrect”.

“It is precisely the role of a journalist in a free society to report on political views, even those that might be unwelcome,” she said.

Among the arrested executives were chief editor Ryan Law and CEO Cheung Kim-hung who were both led into the building in handcuffs.

Hong Kong’s stock exchange said trading in shares of Next Digital — the publisher of the newspaper — had been halted. After the raid, reporters returned to a semi-gutted newsroom with the paper saying 38 computers were taken away as well as hard drives and reporter notepads.

A photographer, who gave just a nickname KT, said the latest operation had “created terror for every Apple Daily staff”. “If I get arrested for reporting the news, I will have no regrets,” he said.

Executive chief editor Lam Man-chung, who was not among those arrested, said that staff would “try all our best to publish newspapers for tomorrow”.

The security law is the speartip of a sweeping crackdown on Beijing’s critics in Hong Kong since 2019’s huge democracy protests. It has criminalised much dissent, given China jurisdiction over some cases and awarded authorities a suite of powerful new investigation powers.

Those convicted face up to life in prison and the majority are denied bail after arrest.

Thursday’s raid was the second on Apple Daily in less than a year.

The tabloid’s billionaire owner Lai, 73, was charged with collusion after hundreds of officers searched the paper’s newsroom last August. He is currently serving multiple jail sentences for attending various protests.

Beijing has made no secret of its desire to see the paper’s voice tamed, with state media routinely describing Lai as a “traitor” and a “black hand”.