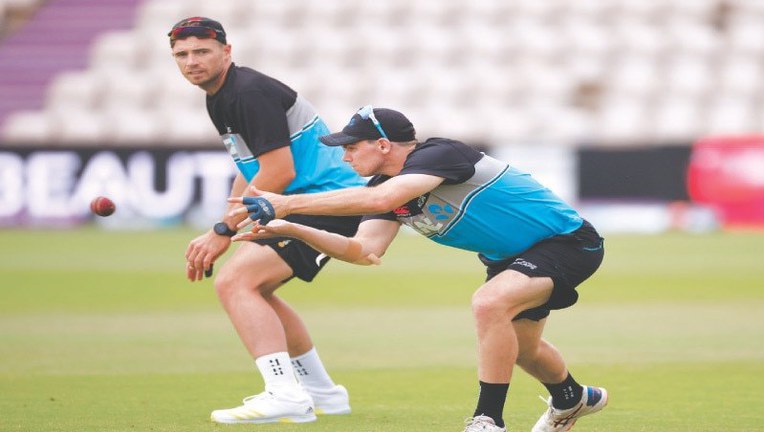 SOUTHAMPTON: Shaded here by the rising hubbub of football’s European Championship is a cricket final that will be followed by many millions of fans, most of them far from its England stage.

The inaugural World Test Championship will be decided from Friday between favoured India and No. 1-ranked New Zealand at the Ageas Bowl in Southampton. There’s been very little local hype, to no surprise.

England’s sporting focus is on Euro 2020, made easier by the dire displays of their national men’s cricket team which was humbled by New Zealand in two Tests this month.

Also, the two-year World Test Championship has been disrupted and disjointed during the Covid-19 pandemic. But, suitably, the two form teams have reached the final, which was moved from Lord’s because Southampton’s Ageas Bowl facility has hotel accommodation to guarantee a bio-bubble.

India start as favourites because of the greater options at its disposal, but will go in under prepared. Because India is reeling from Covid-19, Virat Kohli’s squad had to spend 14 days in quarantine in Mumbai, then another 10 in Southampton.

Only since Sunday has the team been allowed to practice together, undertaking match simulation exercises to try and compensate for the lack of a proper warm-up match.

New Zealand warmed up well in the Tests against England and dominated both, winning the second match at Edgbaston inside four days without captain Kane Williamson, Tim Southee and wicket-keeper B,J, Watling, who is ending his 12-year international career after the final.

Together with Ross Taylor and Trent Boult, the five players have been the spine of New Zealand’s greatest Test era. The team at Edgbaston had six changes, and such is New Zealand’s depth that player-of-the-match Matt Henry is likely to miss out on the final.

The 11th spot seems to be a toss between spinner Ajaz Patel and seam bowling all-rounder Colin de Grand­homme, who was rested at Edgbaston. Eng­land played without a spinner and paid for it. The weather may decide. After four weeks of dry conditions, showers are in the forecast, including the reserve sixth day. Continuous cloud cover will suit New Zealand swing bowlers Southee, Boult, Kyle Jami­eson, and de Grandhomme.

But Southampton Test pitches are inclined to spin, and dry quickly, and India would prefer to play Ravichandran Ashwin and Ravindra Jadeja. Without a warm-up match, though, India may decide that runs are premium, and pick Hanuma Vihari at No. 6. Then one fast bowler may miss out from a group including Ishant Sharma, Mohammed Shami and Mohammed Siraj, who starred in India’s unprecedented Test series triumph in Australia at the start of the year.

Despite featuring adventurous captains Williamson and Kohli, and an extra reserve day, the final is at the mercy of the weather, and the forecast is challenging. If the outcome is a draw, the trophy will be shared.

The match itself could have a profound influence on cricket globally as many cricket fans around the world would be happy to see New Zealand, a country with a population of around five million, compared with India’s 1.3 billion, win a major global title after their agonising Super Over loss to England in the 2019 50-over World Cup final at Lord’s.

There is also widespread admiration for the way a well-balanced side has made the most of slender resources.

India have not played a competitive game since the end of March and have had to make do with an intra-squad practice match while undergoing quarantine.

But they proved their strength in depth when an injury-hit side recovered from the humiliation of being dismissed for 36 in the first Test in Australia to win a four-match series 2-1 with a sensational chase in Bris­bane in January — and that without inspirational Kohli.