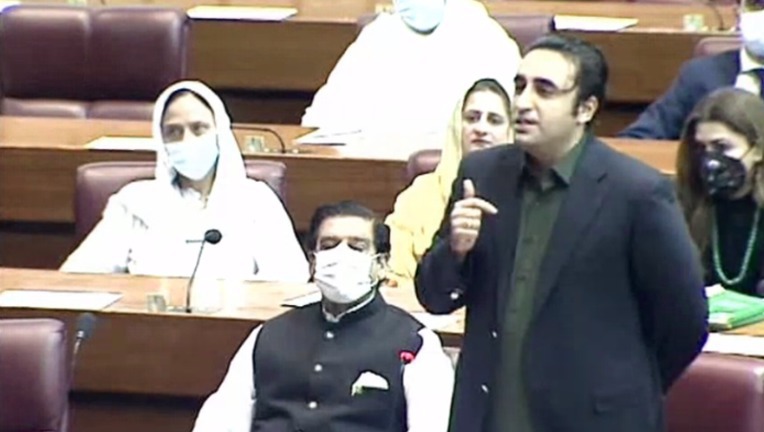 PPP chairperson Bilawal Bhutto-Zardari lambasted the government on Friday for "abandoning" the people of Pakistan during "challenging times", saying that the ruling Pakistan Tehreek-i-Insaf (PTI) could never realise the predicament of the common man.

Addressing the National Assembly (NA) a day after Leader of the Opposition Shehbaz Sharif delivered his budget speech following four days of mayhem during which Shehbaz was unable to address the Lower House, the PPP chief slammed the government for presenting a budget that was a "pack of lies".

Referring to the preceding days of chaos in the NA, he claimed the melee in the house was actually an attempt by treasury members to bar the opposition from "exposing the PTIMF budget".

"They thought they could present their lie of four per cent economic growth as the truth using such antics ... that opposition would not get a chance to speak and people would not realise that the entire budget is based on lies," he said. "But they [the government] must realise that the people don't need the opposition's speech. They are already drowning in the tsunami of inflation that they have brought on."

He went on to say that people, who were suffering because of the inflation brought on by Prime Minister Imran Khan's government, were well aware that the claim of four per cent economic growth was nothing but a lie.

He added that the nation might still have forgiven the government had they not "abandoned the people so ruthlessly amid these difficult times".

Acknowledging that there was inflation during the PPP's tenure as well, Bilawal said the difference between the then government and the incumbent government was that the former had not abandoned the people.

"We introduced the revolutionary Benazir Income Support Programme but this government, on the other hand, harp on about the Ehsaas [programme], when you have no realistion [of the people's predicament]."

Bilawal maintained that the country had seen unprecedented increase in inflation, poverty and unemployment during the PTI's rule and questioned the authenticity of the government's claims of economic growth.

Pointing out that the PPP had increased salaries multiple times and raised pensions, he said the PTI had not raised salaries in the last two years even though the entire world was struggling in the face of the Covid-19 pandemic and every Pakistani was facing financial troubles.

"And this year, salaries there has been a raise of a meagre 10 per cent [in salaries] when the food inflation has increased to around 17 per cent on average."

The PPP chairperson recalled that the PTI had reached an agreement with government workers on raising their salaries, adding that the insufficient hike in their salaries was an act of deception by the government.

He pointed out that the government had proposed many indirect taxes in the budget for the fiscal year 2021-22, which would further burden the people and add to their suffering.