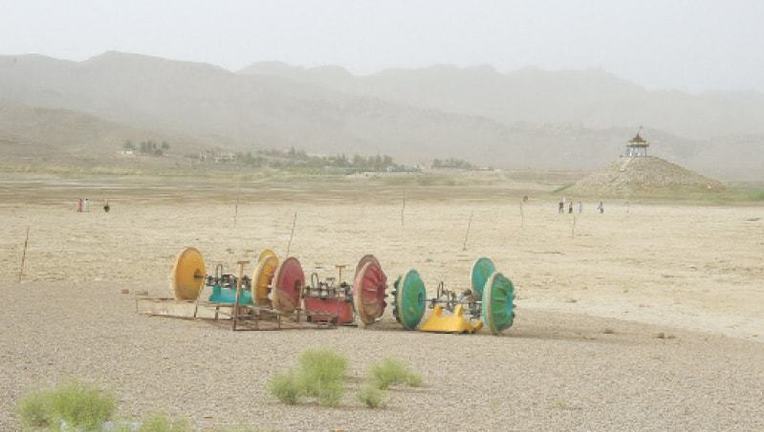 IN the past, the 25-minute journey toward Hanna Lake used to be enchanting. The road leading to the lake had trees on both sides, green shrubs, and a shimmering channel of water running beside it.

People would sit by the road to have picnic, wash their vehicles and rickshaws to the accompaniment of usually raucous music. The twitter of birds would lend a soothing contrast to the loud tunes.

But conversations with people who had been to the place of late filled me with despair. According to them, the fate of this serene spot was sealed once construction magnates concluded that it can be put to better use than picknicking.

So I decided to find out for myself. Last week I requested an acquaintance to accompany me to Hanna Lake.

By the time we got to the lake’s vicinity, shock and sadness ambushed me. The trees and the birds have all gone. Tall buildings and the groan and clank of heavy machinery have dislodged pristine sights and sounds.

I started cursing myself for having undertaken the trip since it had robbed me of some fond memories.

My companion, too, was filled with nostalgia. “I used to skip my classes to come here,” he recalled. “We used to sit under the trees during school time and then return home from here directly.”

I strike a conversation with one of the few visitors.

Naseer Ahmad comes here frequently. But his face is now a picture of disappointment. “I brought my family to see some natural beauty. But the lake has dried up. So our weekend has been spoiled.”

Like Naseer, female students of Karadagap Degree College, in Mastung, were sorry to see the dry lake.

The water has evaporated thanks to a blazing sun.

The memory of a Hanna Lake filled to the brim now seems to be a dream. In fact there was a time not too long ago when an abundance of water after snow and rain had its flip side.

There were quite a few incidents of drowning. One of the most tragic was in 1990 when 40 people drowned after an overcrowded boat overturned. People started calling it the “Bloody Lake”.

Situated on the outskirts of the Balochistan capital, Hanna Lake is a man-made reservoir in the far corner of the Quetta valley. It was built by the British at a time when Quetta used to be a rural town. It started expanding after the British built their cantonment.

The lake sits in a bowl surrounded by Quetta’s eastern mountains, known as Koh-i-Murdar.

“It used to be an abode of birds, including houbara bustard. But no bird takes the trouble to come here now,” Naseem Kakar says wistfully.

Its forbidding look notwithstanding, people still flock to Hanna Lake because they have no alternative.

“We come here to escape the noise and smoke of Quetta,” says a youngster.

Mohammad Ali Batur is a Quetta-based environmentalist. According to him, it used to rain and snow a lot in Quetta during winters. “But over the past seven or eight years, the region has received little rain and snow because of climate change.”

The only means to fight this change is tree plantation. “But instead of planting more trees, the existing trees are being chopped down,” he laments.

However, Quetta and its vicinity have got a pleasant surprise in recent days in the shape of rain.

But Mr Batur sees dark clouds lurking behind the silver lining. “Unseasonal rain and snow are the very definition of climate change. We hear of snowfall in places that have seen no such thing in living memory. This is a warning of disaster,” he says.

There appears to be no relief at hand from doom and gloom.