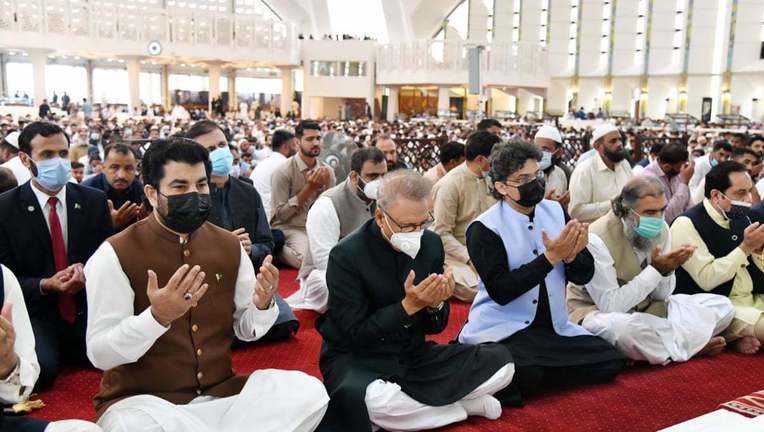 As Pakistanis celebrated their second Eidul Azha under the shadow of the worsening coronavirus situation, the president, prime minister and other leaders emphasised the spirit of sacrifice and urged people to follow standard operating procedures (SOPs) to stop the coronavirus from spreading.

President Dr Arif Alvi wished Eid Mubarak and prayed for forgiveness, unity and an end to the pandemic.

"May He (God) make Pakistan strong & prosperous. May we sacrifice for others in the spirit of [Prophet] Ibrahim. Ameen," he prayed.

He appealed to the nation to strictly observe coronavirus precautionary measures including wearing masks, washing hands and maintaining social distancing, so it could succeed in defeating the pandemic, according to an APP report.

"Qurbani (ritual animal sacrifice) does not only mean sacrificing the animal but it also refers to man sacrificing his desires for a higher purpose. This passion gives rise to such an ability in a man that even the hardest times do not make him go astray from the right path," the Prime Minister's Office quoted him as saying.

The premier added that this was "the same spirit of sacrifice because of which the Pakistani nation had been protected from the universal pandemic through great intelligence, a national strategy and courage".

The country's economic situation — previously beset by difficulties — was changing, he said, adding, "Our economy is [headed] in the right direction."

He further stated that economic indicators were "encouraging" because of steps taken by the government and people were being provided relief.

"The day is not far when Pakistan will stand alongside developed countries and the entire nation's head will be raised with pride in front of the world," he added.

"May we embrace the very spirit of the occasion; of sacrifice, patience and helping those less fortunate," he tweeted.

Meanwhile, Interior Minister Sheikh Rashid Ahmed prayed for the country to be protected from the enemy's designs.

Minister for Planning, Development and Special Initiatives Asad Umar too echoed the need to celebrate Eid while following precautionary measures against the coronavirus.

He also conveyed wishes for students who will be giving exams. "It has not been easy but you will come out of this experience as winners," he assured.

While wishing the nation Eid Mubarak, PPP Chairperson Bilawal Bhutto-Zardari reminded them that the pandemic was not yet over and the festival should be celebrated with simplicity.

"It is our social and religious obligation to celebrate the happiness with deprived sections of the society," he said, calling upon people to cooperate with the district administrations to ensure that the environment was kept clean.