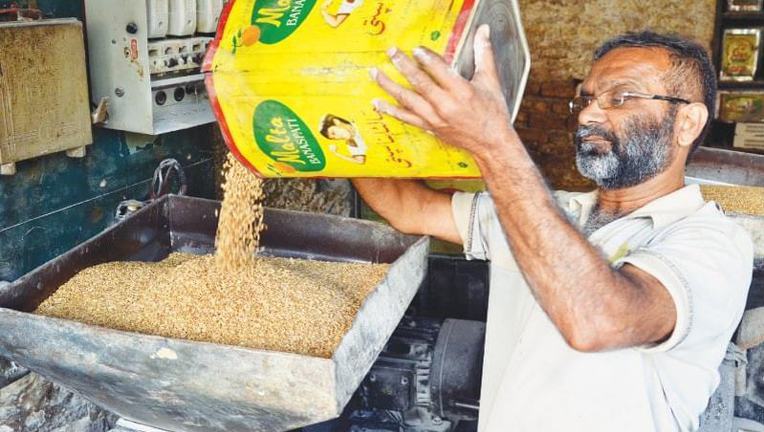 LAHORE: With the federal government hinting, and the Punjab most probably following, at wheat release price of Rs1,950 per 40kg, the flour price is set to increase by a staggering 22.73 per cent – from the current official price of Rs860 per 20 kilo to Rs1,100.

The new flour price, however, will be 10.57 per cent less than the current market price which had hit Rs1,230 per 20kg because of an exceptional increase in wheat price during the last six weeks: wheat hit at the rate of Rs2,200 per 40kg.

However, if the last official price is something to go by, the increase per 20kg bag will be Rs240. Last year, Punjab had a release price of Rs1,475 per 40kg and had allowed millers to sell a 20kg bag at Rs860 after adding grinding charges of Rs105 per bag. The newly announced price of Rs1,950 per 40kg (or 24.36pc more) is bound to reflect in new price: Rs975 wheat charges, Rs105 grinding charges and Rs20 transportation charges and profit margin) and a market price of around Rs1,100 per 40kg.

“The Punjab had also recommended the same price which Special Assistant to Prime Minister Jamshaid Iqbal Cheema hinted at on Wednesday,” claims an official of the Provincial Food Department.

The next crucial decision, which the department now has to take, is the release date. The decision on both issues (release price and date) has to be taken by the provincial cabinet and the department has already moved a summary in this regard and a decision should come by the end of this, or early next, week. The supply side situation, he said, is still easy.

“So, the food department can wait for a week or two. However, the final word will come from the cabinet,” he said.

“Yes, there is no supply panic. The millers are holding stocks of around one million tonnes: 850,000 tonnes of declared ones and some undeclared for trading purposes. The department itself houses around four million tonnes and three million tonnes is being imported by the federal government; of which one million tonnes will be coming to Punjab in case of need,” explains a miller from the city.

“The total availability will thus be around 5.8 million tonnes. It is the same quantity that was available to the province last year. Thus everyone should stay comfortable as far as domestic requirement and arability is concerned. However, drainage to Afghanistan is a question mark,” claims Muhammad Ramzan, a trader from the city.

Afghans are left on their own this year and there would neither be American nor Indian food help coming to them. There only fallback would be Pakistan.

“Pakistan can have import for export policy, to begin with. It means allowing millers to import as much wheat as they want to send to Afghanistan. At the later stage (may be by November or December), Pakistan can allow flour export to Afghanistan if its stocks allow. But, it should not take eyes off the Afghan market because it can create pressure, in otherwise comfortable Pakistani market, he advises.

Justifying the new price, SAPM Cheema insisted: “In India, each kilo of flour costs Rs61, it is Rs75 in Bangladesh. Even after the increase, per kilo price in Pakistan will be Rs55 per kilo.”

He said this while addressing a press conference here on Wednesday.