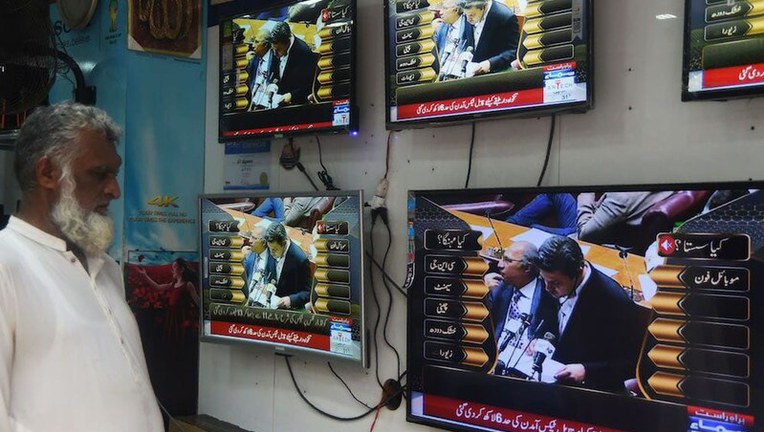 ISLAMABAD: The Pakistan Electronic Media Regulatory Authority (Pemra) has directed all public and private TV channels to flash the political map of Pakistan before airing news bulletins at 9pm.

“All the news channels (both public and private) have to flash the political map of Pakistan for two seconds before airing the news bulletin at 9pm on a regular basis,” says the Pemra directive issued on November 3 that became public on Sunday.

“All the satellite TV channel licensees (news and current affairs/regional language) are, therefore, directed to comply with the above-mentioned recommendation in letter and spirit without fail,” it says.

Pemra says it has issued the directives to TV channels on the basis of a September 16 letter of the Ministry of Information and Broadcasting.

When contacted, Minister for Information and Broadcasting Fawad Chaudhry justified the act of his ministry to issue the directive to Pemra, saying the government could do so under Section 5 of the Pemra Ordinance 2002.

The PTI government had on August 4 last year unveiled the country’s new political map, essentially asserting its longstanding position on Kashmir and Sir Creek disputes. Prime Minister Imran Khan, while introducing the map at a ceremony, had said the map reflected the national aspiration and supported principled stance on the Kashmir dispute.

The new map was made public a day before Pakistan observed the first anniversary of annexation of occupied Kashmir. India annexed the held territory on August 5, 2019, by revoking articles 370 and 35A of its constitution, which had provided special status to occupied Kashmir and rights and privileges to the Kashmiris.

Prime Minister Khan had said that it would now be the “official map” after being approved by the federal cabinet and would be the one used in schools and colleges.

The map clearly identifies occupied Kashmir as a “disputed territory” and states that the final status will be decided in line with the relevant United Nations Security Council resolutions. The map rejects the illegal steps taken by India, PM Khan said, adding that the federal cabinet and the country’s political leadership had supported it.

Later, Foreign Minister Shah Mahmood Qureshi had said that administrative maps had been introduced before, but this was the first time that a map reflected the aspirations of the people. He added that it had also been made clear that Siachen was a part of Pakistan. The Line of Control (LoC) has been marked with red dotted line. He maintained that Pakistan had in the map also rejected India’s claim over Sir Creek. Further, the erstwhile Fata has been shown as part of Khyber Pakhtunkhwa province.

Mr Qureshi had said the entire nation was united on the new political map and the federal cabinet, the Kashmiri leadership and Pakistan’s political leadership had endorsed the government’s move.