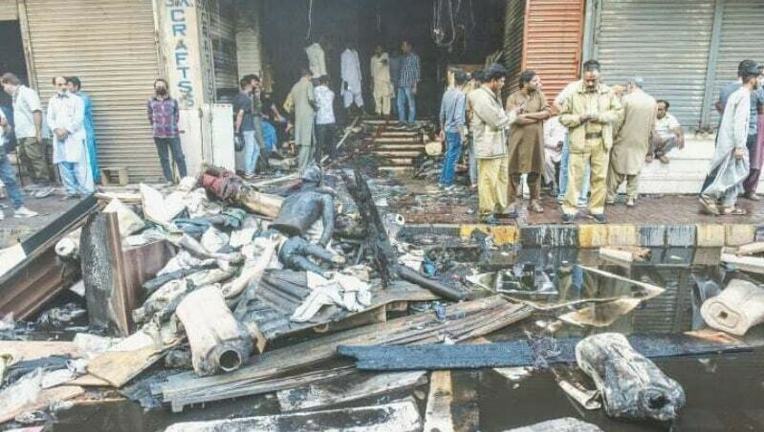 KARACHI: As a committee formed by the Sindh government to investigate the incident of fire that broke out in the Saddar Cooperative Market on Sunday and destroyed dozens of shops formally began its work on Tuesday, traders, their leaders and even fire officials were not ready to rule out the possibility of sabotage behind the blaze.

Chief Fire Officer Mubin Ahmed, who witnessed a few ‘strange’ things during the firefighting operation, said that the things observed made the whole episode mysterious and suspicious and needed to be investigated.

However, he avoided sharing details, but said that one could not rule out the possibility of ‘sabotage’ until a proper investigation into the incident was carried out with all available technologies being used for such incidents.

“The key factor of the whole finding so far is the behaviour of the fire and the way it travelled,” he said.

“We deal with fire incidents almost daily. The accidental fire doesn’t spread like this one did. There was no single triggering point of the fire as it was moving from all directions and engulfing things all around the market. This is quite mysterious and needed to be probed by the committee. We would compile our initial report by Wednesday (today).”

An FIR was lodged on Tuesday night under Section 436 (Mischief by fire or explosive substance with intent to destroy house), 437 (Mischief with intent to destroy or make unsafe a decked vessel or one of twenty tons burden) and 34 (common intention) of the Pakistan Penal Code on the complaint of the president of market association Shaikh Mohammad Feroz. He alleged in the FIR that it was a deliberate act of arson.

Meanwhile, the traders, who lost their businesses in the fire, continued to question the role of authorities and demanded immediate compensation, proper registration of an FIR and rehabilitation of their shops.

The affected traders formally joined hands with their city body that warned that if the Sindh government continued to ignore the situation of their fellow businessmen, they would come up with a collective and much stronger strategy.

The leaders of the All City Tajir Ittehad — an umbrella association of some 300 markets across Karachi — visited the affected market, met the shopkeepers, who lost their businesses and made a joint demand for a proper investigation and immediate compensation.

“It’s so unfortunate that the police are using delaying tactics and not registering the case,” said Muhammad Ahmed Shamsi of the All City Tajir Ittehad.

“Similarly, none of the provincial government key persons or ministers visited the traders who have lost their businesses. No assurance has come from the government so far. The most important thing is the investigation into the incident. The traders who have lost their businesses are convinced that this is sabotage and they have reasons for that. They must be heard and investigation should be completed immediately,” he said.

Sources said that the probe team announced by the Sindh government started its work on Tuesday and visited the market to investigate the incident.

The traders failed again to get an FIR registered for the suspected foul play behind the fire as they criticised the role of police authorities accusing them of using delaying tactics.

The fire department and the city administration formally moved its machinery and other stuff from the main road on Tuesday to clear it for vehicular traffic after more than 48 hours.

The fire department said it was in final stages of compiling its initial report, which was expected to be ready by Wednesday.