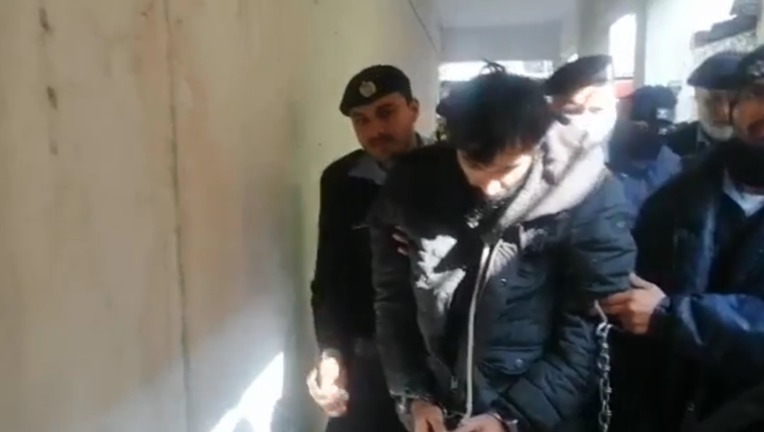 ISLAMABAD: A sessions court was informed during the hearing of the Noor Mukadam murder case on Monday that the National Forensic Science Agency (NFSA) did not find fingerprints of Zahir Jaffer on the pistol recovered from the crime scene.

Prosecutor Rana Hassan Abbas was also present while the main accused, Zahir Jaffer, sat on the ground in the courtroom with his knees up and head down during the entire course of hearing. His head was bowed to one side as he was in a state of drowsiness.

Mr Sattar told the court while answering questions from Advocate Zulqarnain that he reached the crime scene after getting information from the investigation wing at about 9:45/10pm along with ASI Zubair Mazhar, constables Dost Mohammad, Sikandar Hayat, Abid Lateef, Aitzaz, SHO women and constable Aqsa Rani.

ASI Zubair Mazhar had arrived at the crime scene earlier, said the IO while confessing that what he wrote in the police diary that Mazhar was accompanying him was wrong.

Plaintiff Shaukat Ali Mukadam was already present at the scene along with his relatives, said Mr Sattar, adding he never asked Mr Mukadam who were these people [his relatives] except a person named Jawad Jahan. “I did not ask Jawad Jahan how he received the information and reached the spot,” he added.

The court was also informed that as per the DNA report issued by the PFSA, hair recovered from the Swiss knife was found not suitable for the DNA analysis due to hair follicle. The DNA profile obtained from item No 21.1 (swab taken from large blade of the knife) is a mixture of at least two individuals with major and minor component, the report reads. There were no blood stains on Zahir’s pants when I arrested him, the IO said.

As per processing and the report, Zahir’s fingerprints were not found on the knife. The IO said the NFSA team reached the spot at about 11:15pm and left at 1am. In the meanwhile, he recorded the statement of the NFSA team incharge Imran at 12:45am and started writing the police diary at about 12:05am.

“I reread all the documents after the preparation of the challan. The death certificate was obtained from Polyclinic on which the date and time of death was mentioned as 12am, July 21, 2021,” the IO said. The body was sent from the F-7 house to the mortuary at 11:45pm on July 20, Mr Sattar added.

The court also learnt that Column 7 of the inquest report mentioned that there were no signs of any cut on the clothes of the deceased. It was also revealed during the cross-examination that the two remands granted on July 21 and July 24, respectively, did not mention the recovery of anything from the spot. The IO also admitted that the sitemap neither showed the presence of Zakir Jaffer nor the basement and the entry or exit to the basement of the house.

“I have not mentioned in the police diary that I searched only the first floor, the lounge and the related room and not searched other portion of the house,” Mr Sattar informed the court. The IO said he did not personally know Noor Mukadam and that he did not get the photo collected from the DVR vetted through a photogrammetry test. I didn’t mention the name/brand/company of the DVR recovered from the house, he said.

He also accepted that he did not notice a security system installed at the house.

After the cross-examination, the court adjourned the hearing till Wednesday.