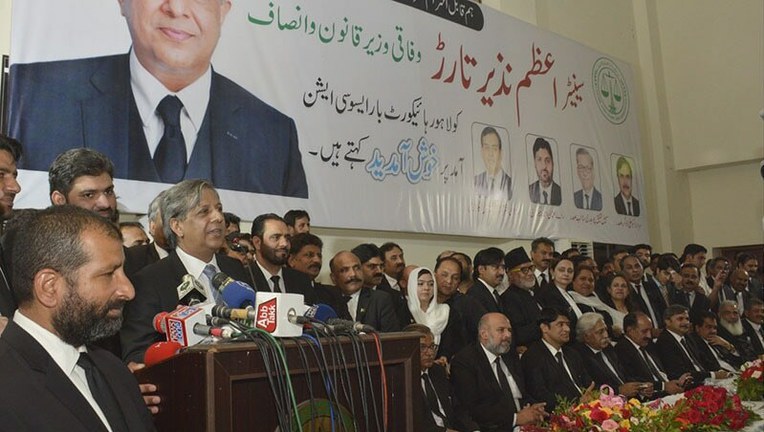 LAHORE: Federal Minister for Law and Justice Senator Azam Nazir Tarar on Friday hinted that the coalition government would complete its constitutional term and any decision on early election will be taken after consultations with its allies.

He said the Election Commission of Pakistan (ECP) had already stated it would require at least six to seven months to complete the legal requirements, including the delimitation process, for holding general elections.

Mr Tarar was responding to reporters’ queries in the Lahore High Court Bar Association (LHCBA) where he was given a reception on becoming law minister.

To a query about the decisions taken in the huddle of PML-N leadership in London, the minister said former premier Nawaz Sharif and Prime Minister Shehbaz Sharif resolved that no decision would be taken without consulting all partners in the coalition government.

Mr Tarar said the Imran Khan government brought economic downfall in the country. He said though the country was facing a difficult time, PM Shehbaz Sharif, being a workaholic, would drive it out of the crisis.

To another query, he said Nawaz Sharif would definitely return to the country before the next general election.

Addressing the reception, the law minister said the provision of justice was top priority of the government and all-out efforts would be made for the purpose. He said the LHCBA was the biggest bar of the subcontinent and was his home where he was brought up.

He thanked the bar for inviting him and said efforts would be made for the welfare of the legal fraternity. He said he talked to Prime Minister Sharif for swift resolution of the issues faced by legal fraternity and to form a committee for the purpose.

Tarar said the prime minister had constituted a special committee for resolving the issues of the Supreme Court Bar Housing Society that met twice a week.

He said previously Rs50 to Rs100 million were reserved for the bars in the budget, but he took up the matter with the prime minister and finance minister and recommended an allocation of Rs500 million for the purpose in the upcoming budget.

He also handed over a cheque of Rs20 million to the LHCBA leadership as a grant and promised that more funds would be provided in the upcoming budget.