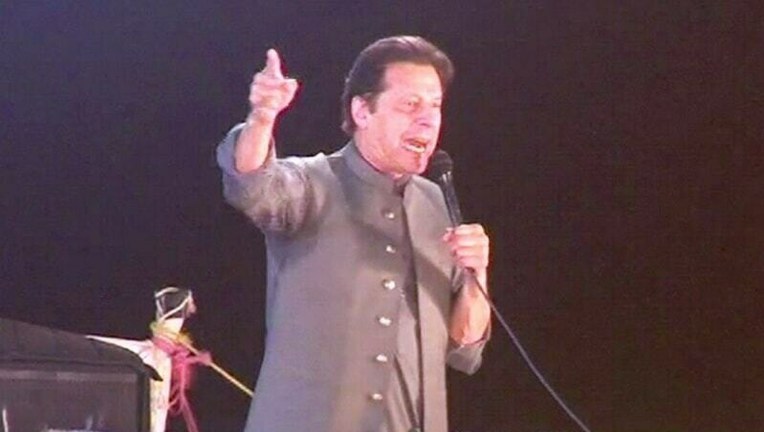 • Claims to have ‘blocked’ numbers of those in establishment, says their differences based on issue of Buzdar, Faiz
• Says ‘atomic bomb’ on Pakistan would be better than having ‘these criminals’ at the helm of government

MARDAN/ISLAMABAD: Chairman of Pakistan Tehreek-i-Insaf (PTI) and ex-premier Imran Khan has demanded an announcement of a date for the general election or else warned of a million march towards Islamabad to get rid of the imported government.

Addressing a public meeting at the railway station ground on Mardan-Nowshera Road on Friday, Mr Khan said he was not calling people to take to the streets for the sake of politics but to bring about a revolution, freeing the nation from the clutches of the superpowers.

Earlier, while talking to a group of journalists at his Banigala residence in Islamabad, Mr Khan claimed he is not receiving ‘messages’ from people in the ‘establishment’ as he had ‘blocked’ their phone numbers, recalling that ‘differences’ between him and the ‘establishment’ had surfaced on the issue of removal of then Punjab chief minister Usman Buzdar and then country’s spymaster Lt Gen Faiz Hameed.

However, according to media reports, the ex-premier also said, “Messages are coming from the establishment, but I will not talk to anyone unless the date of the next general election is announced.” He urged people to prepare for the ‘historic march’ to the federal capital and said that “many options [would be] open when people come on streets”.

*In his TV show, anchor Shahzad Iqbal said Imran Khan told media persons that when he referred to neutrals, he meant none other than the country’s powerful establishment.

“I couldn’t even think that corruption was not an issue for “powerful quarters” and they would impose these criminals on the country, but unfortunately, that happened,” the ex-premier said, according to the anchor. “Instead of handing over the reins of power to these people, it would have been better if an atomic bomb had been dropped on Pakistan.”*

Earlier on May 8, both Inter-Services Public Relations (ISPR) and Federal Investigation Agency (FIA) issued separate statements and urged people inside the country and overseas Pakistanis to be conscious in this regard. “The army has taken a strong exception to intensified and deliberate attempts to drag its name into the country’s ongoing political discourse by some political leaders, journalists and analysts,” stated an ISPR press release.

Addressing PTI workers in Mardan, Mr Khan alleged that he was ousted from power through a conspiracy hatched jointly by America and Pakistani opposition parties’ leaders. He said he sent former finance minister Shaukat Tareen to ‘neutrals’ to stop conspiracy being hatched against his government, as otherwise Pakistan’s economy would be ruined.

But the ‘neutrals’ did not play their role to block the way of conspirators, he said, adding that a no-confidence move was allowed to succeed to replace him with ‘looters and plunderers’.

He said that he visited Mardan district to prepare people for Islamabad-march to press the incumbent government to announce a date for the fresh general election, which was ‘the only solution’ to all problems.

“People will decide who has the right to run the country’s affairs,” he said, adding that those sitting in the UK had no right to decide Pakistan’s fate. He said it was a decisive movement for people to decide if they wanted to remain slaves of America or they wanted to free themselves from the US slavery.

Earlier during his talk with media persons, the PTI chairman said he had enjoyed good relations with the ‘establishment’ during his over three years of rule, but differences surfaced on the issue of removal of the former CM and former director general of the Inter-Services Intelligence.

Mr Khan said his government had no say in the judiciary and the National Accountability Bureau, but “those who had an influence on these institutions” could get sentenced eight to 10 people to strengthen the country’s accountability system.

He questioned why the removal of ex-CM was imperative when no one was paying any heed to what he called ‘unprecedented mismanagement and corruption’ in Sindh. He claimed he had no intention to appoint former DG ISI (Lt Gen Faiz Hameed) as the new army chief. “I swear to Allah Almighty that I had not even thought about appointing former DG ISI as army chief,” he added.

“In early days of my government, some 30 MPAs (of opposition benches) in Punjab wanted to make a forward bloc and join us after which politics of N league (Pakistan Muslim League-Nawaz) could finish, but these MPAs received calls from powerful quarters that they should stay where they were,” he added.

Earlier in the day, Mr Khan said he had already warned the ‘neutrals’ that if a ‘conspiracy’ against his government succeeded, the country would face an unprecedented economic crisis.

“Market awaiting policy and action, which imported government has failed to provide. Shaukat Tareen and I had warned the “neutrals” that if conspiracy succeeded, our fragile economic recovery would go into a tailspin. That is what has now happened,” tweeted the ex-premier, terming the PML-N-led coalition government an ‘imported government’.