PESHAWAR: A police officer was martyred in a gun attack on the outskirts of the provincial capital on Wednesday morning as he was driving his children to the school, the police said.

However, the children were unhurt in the car attack.

Sehar Gul, a reserve inspector of the Frontier Reserve Police, was targeted in the limits of the Inqilab police station by four attackers, who rode two motorcycles.

A senior police official told Dawn on condition of anonymity that the police considered the attack as an act of terrorism.

He said that four attackers riding two motorcycles opened fire on the police officer and fled. The official said that the police had launched an investigation into the attack but it would be premature to say about the terror outfit involved it.

He said that the rapid, unplanned expansion of the city had made it easier for terrorists to attack targets and escape.

The official complained that generally, the people didn’t cooperate with investigators as they refused to testify in such cases.

Funeral prayers of the martyred officer were offered at the Malik Saad Shaheed Police Lines, where senior police, military and civil officers were in attendance. His body was taken to his ancestral Surezai village after the funeral, where he was laid to rest.

Mr Gul is the second police officer to be martyred in Peshawar in less than a week.

On night of May 17, an Intelligence Bureau official was martyred, while another and a civilian were injured in a gun attack on their vehicle on Circular Road area.

On May 15, gunmen killed two Sikh traders in Batatal area and escaped. 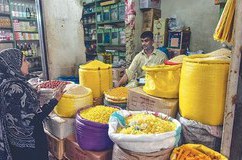 Govt urged to abolish all taxes on food items