Situationer: How Imran’s march came to an abrupt end

ISLAMABAD: Pakistan Tehreek-i-Insaf (PTI) chairman Imran Khan’s surprise decision about not going ahead with the sit-in at the end of the long march left almost everyone baffled — foes and allies alike — but there is convergence on one thing — the manner in which it all ended, at least for now, carried clear indications of who made it happen.

The general perception, though most shy away from saying that openly, is that the military had to ultimately play its role to prevent things from getting out of control.

Former National Security Adviser retired Lt Gen Naeem Khalid Lodhi candidly admits that he too agrees with this. “There is a strong possibility of positive interference by the military to prevent chaos and seek a return of semblance of political stability so that the process for resuscitating the economy could begin.”

Another retired general, on the condition of anonymity, said there was a realisation in the top brass that no one at the helm of affairs would be able to escape responsibility if matters were to go in a wrong direction.

The biggest challenge for the military, a source claimed, was to open up communication channels with Mr Khan, especially in view of their frayed relations. But, as the former prime minister proceeded with the long march plans, a sense of urgency was felt everywhere and multiple channels were employed to bring him around.

An ex-CJ, a leading businessman and a retired general played a key role

The source said those who acted as a go-between included a former chief justice, a leading businessman, and a retired general.

“It was not an easy task given Imran Khan’s obstinacy and the fact that he had invested a lot of effort into it,” the source privy to the negotiations said.

Though the source did not share the chronology of the negotiations, it appeared from the discussion that they continued late into Wednesday night and probably into the early hours of Thursday.

Mr Khan agreed to go back, without staging the planned sit-in, on the assurance that the date for the dissolution of the assemblies and elections would be given in June. He too in his speech, in which he announced the end of the long march, had said: “I’m giving you six days. Announce elections within six days, announce elections in the month of June …”

The former prime minister was also asked to consider the return of PTI to the National Assembly by withdrawing the resignations of his party’s legislators so that it could be part of the consultations on the interim setup — as per the Constitution — under whose watch next elections will be held.

The PTI chief, it is said, held on to the opportunity seeing that he was not able to pull out the numbers that he had expected, especially from Punjab — the government’s crackdown notwithstanding.

As of Thursday night, apprehensions were growing that the government may back off from the deal.

Fissures between the former PTI government and the military had begun late last year after the latter decided to end all support that it had been extending to the former. The decision in this regard was taken because of Mr Khan’s government’s persistent failure for which the military leadership had to bear the then opposition’s criticism.

The then opposition would point fingers at ‘selectors’ — a euphemism used by them to blame the military for helping PTI form the government.

“It was decided that the military would no more play a role in the political affairs,” a source said, adding that the PTI government that had become too dependent couldn’t survive as expected. “The edifice came down in no time,” he recalled.

This withdrawal of support was, however, misconstrued by Mr Khan as military siding with his opponents. That’s how “neutrals” began to feature in the former prime minister’s political statements. His view was that he was righteous and the rest were evil and hence the military should continue supporting him.

Lt Gen Faiz Hamid’s transfer and the appointment of Lt Gen Nadeem Anjum as the ISI chief — which many believe caused the eventual breakup — a political source, who had watched the episode from close quarters, said was actually a consequence of the military’s decision to distance itself from political affairs.

People had begun talking about Mr Khan’s split with the military in hushed tones since the last quarter of 2021, but came into the spotlight when the PDM’s no-confidence move got into top gear in March.

PTI’s reach out to PPP

A source said the former prime minister, despite desertions from his ranks, initially looked confident about defeating the no-confidence motion because he was expecting a deal with Pakistan Peoples Party, with whom his government had opened a secret channel.

A PPP source privately confirmed the contact, but said it did not work because the party had gone too far with the no-confidence move. “It was difficult to back off and additionally the trust deficit was massive,” the PPP source maintained.

It was at this point that US conspiracy narrative was unveiled at a rally in Islamabad on March 27 and kept evolving with references to Mir Jafar’s and Mir Sadiq’s being subsequently inserted into it. 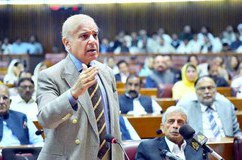