Three children among five killed as rains pound most of KP 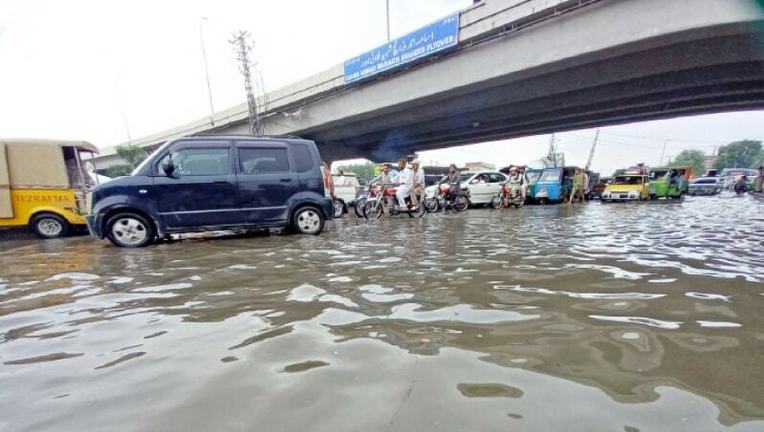 The Rescue 1122 said Nizar Khan lost his two sons, including Sahil, 8, and Sohail, 7, as the roof of their house collapsed due to downpour in Cheena area of Buner district, while his wife suffered critical wounds and was shifted to the District Headquarters Hospital, Daggar.

It said a car was washed away by flash floods in Wanda Haibti area in DI Khan killing the driver, while another man was died in a wall collapse incident in Wanda Khaliq Shah area.

In another incident, a hotel’s roof collapsed in Kualchi area injuring three people. Also, rains damaged 11 houses in the area.

Lakki Marwat district reported the electrocution of a five-year-old child after a power transmission line fell on him due to lightning in Langarkhel area.

Resident Mohammad Jibran said in a rare occurrence, snow fell in Kaghan valley in the third quarter of June.

The snowfall began at around 4pm and continued intermittently for over two hours.

He said motorists, including tourists, enjoyed the fall of snowflakes at Lolusar Lake after pulling over on the roadside.

The heavy rain, which had begun three days ago, triggered landslides and thus, blocking roads in Siren, Konsh and Kaghan valleys.

Hussain Deen of the Moon Restaurants at Bassal near the Lolusar Lake said the Mansehra-Naran-Jalkhad Road, which linked Khyber Pakhtunkhwa with Gilgit-Baltistan, was clear to traffic.

The police issued a weather advisory to visitors to Dudipatsar Lake and said they won’t let anyone go beyond Bassal until the rain stopped.

Officials of the Upper Kohistan police control room said the Karakoram Highway was clear to traffic despite heavy rains.

Snowfall was also reported in Upper Chitral district and hills of Shangla district.

In Shangla, downpour continued for the third consecutive day on Tuesday with the mountains receiving snow, which turned the weather chilly.

Mohmand district recorded heavy rains coupled with a hailstorm, which damaged standing crops in Pandiali, Haleemzai and Safi tehsils. Dozens of cattle were washed away and several solar panels were damaged due to rain in Kasorai, Danish Kool, Pachagan and Tamanzai villages of Pandiali tehsil. The rainstorm hit several areas in Haleemzai and Safi tehsils to the misery of the residents and travellers.

Resident Rahat Jan told Dawn that 35 sheep and many cows were swept away in the Khoi Danishkool floods. The people demanded compensation for losses.

It forecast more rain in most of the province for Wednesday.