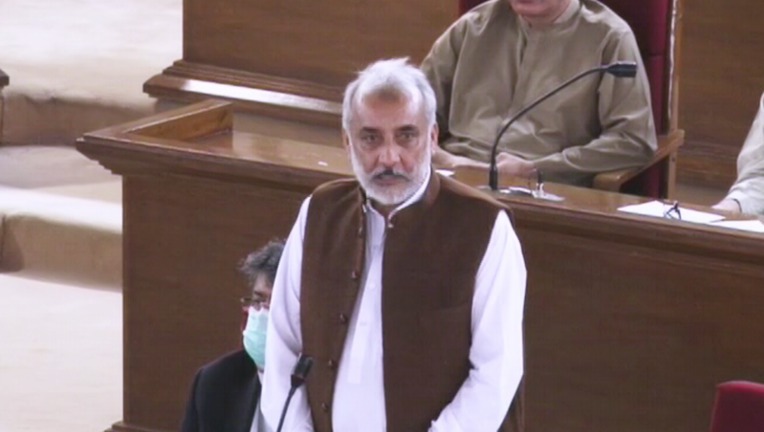 QUETTA: Balochistan Finance Minister Sardar Abdul Rehman Khetran has refuted rumours regarding differences over the new provincial budget presented on Tuesday, saying that it was prepared based on the vision to share funds for equal development of the entire province.

“It is based on the proposals of the elected representatives of the province, and the cabinet approved it with consensus and no cabinet members from the coalition partners disagreed with budget proposals,” he clarified while speaking at the post-budget press conference along with Secretary Finance Hafiz Abdul Basit on Wednesday.

Health card to be issued within six months; Balochistan Bank will be set up next year

Referring to budget proposals, he said the budget outlay for 2022-23 was Rs612.7 billion, of which Rs191.5bn had been allocated for the PSDP while the gap between income and expenditure would be Rs72.3bn.

He said that out of the Rs172bn PSDP for the outgoing fiscal year, Rs92bn had been spent on development and 1,238 projects had been completed.

In reply to a question, he said the health card would be issued within six months and the Balochistan Bank would be set up next year with the help of banking experts.

The Balochistan government earlier declared the identity card as a health card, but a separate card was issued in other provinces, he said.

He said the government would adopt measures to increase provincial revenue to make more funds available for the PSDP and bridge the budget deficit.

The minister said that though the Balochistan government had not imposed any new tax, it would take steps to make the existing review collection system more effective to increase provincial income.

Another source of revenue in the coming years would be Reko Diq gold and copper mining project, which would be given priority.

Replying to a question, Sardar Abdul Rehman Khetran said the debt of the province at present stood at Rs55bn, which had been allocated in the budget for repayment.

Besides, Rs1bn has been allocated for water recharging in Quetta and making water reservoirs to raise the water level and also store it.

Another Rs5bn has been earmarked for 23 projects for the development of fisheries, while Rs1.24bn has been allocated for non-developmental projects. He said the cabinet had decided that the personnel of the fisheries department would conduct policing in the sea.