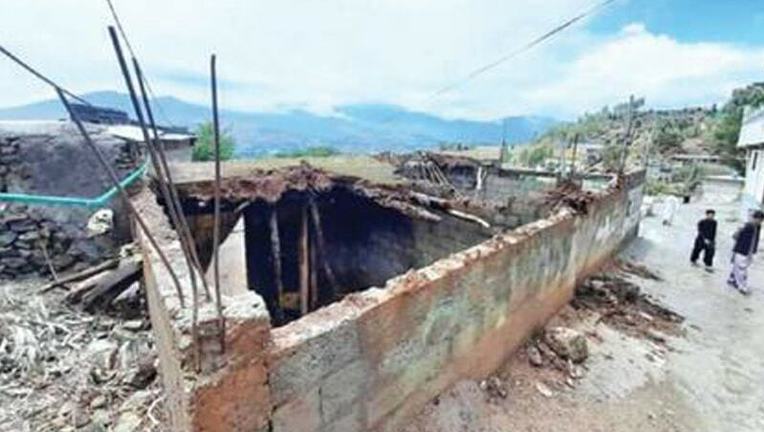 Also, a man lost life and many people suffered injuries in rain-related incidents in other parts of the province.

All hill torrents, including the Tochi River, recorded high flooding as the rain accompanied by lightning and windstorm struck the area. The rain and flash floods damaged several houses.

The Provincial Disaster Management Authority had already issued a rain and flood alert two days ago.

One killed, many injured in rain-related incidents

Also in the day, the residents of Lekawar Samarbagh area in Lower Dir district recovered a body from a stream.

They said the deceased, Mohammad Gul, was swept away by floodwaters.

A two-room house collapsed in Tora Tega area of Timergara due to heavy rain. However, no damage to public life was reported as the residents stepped out before the incident.

Traffic disruptions were reported in Talash, especially on Chakdara-Timergara Road, and other parts of the district.

Floodwater entered the building of Saddo grid station and a market in Balambat. The Rescue 1122 workers evacuated staff members.

Four people, including a woman, were injured in rain- related incidents in Bajaur tribal district.

Rescue officials told Dawn that a vehicle fell into a swollen river in Mandal area of Salarzai tehsil.

They said all eight people travelling in the vehicle were rescued and shifted to the District Headquarters Hospital, Khar, where their condition was stable. The vehicle was also recovered.

A news release issued by Rescue 1122 office in Khar area said a woman was injured when the room of a house collapsed in Haji Lawang area due to heavy rain in the early hours of Wednesday.

The Rescue 1122 workers shifted the woman to the District Headquarters Hospital, Khar, where she was given first aid.

The people of several areas complained about the downpour-induced closure of several link roads for the third consecutive day.

They said as the roads were blocked, intermediate examination candidates from far-flung areas couldn’t make it to the exam centres in Government Postgraduate College and other educational institutions in Khar.

They complained about prolonged power cuts.