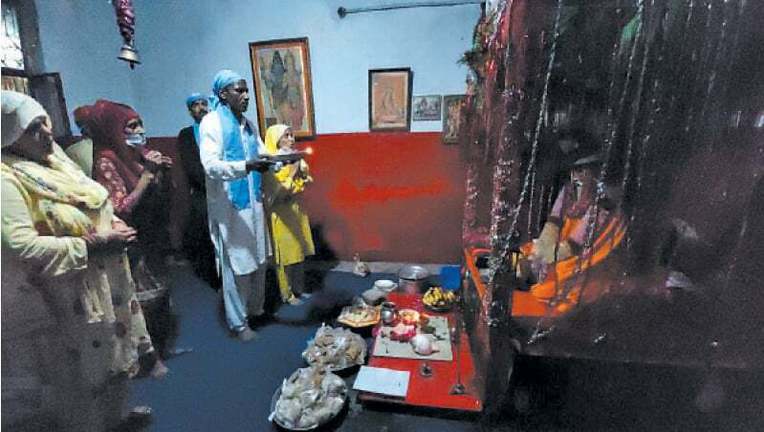 LAHORE: The recently re-acquired historic Valmiki temple in the Neela Gumbad area here was formally inaugurated on Wednesday at an event organised under the auspices of the Pakistan Hindu Mandir Management Committee (PHMMC) and the Evacuee Trust Property Board (ETPB).

The event was attended by over 100 Valmiki Hindus from across the country, as well as various Sikh, Christian and Muslim leaders. The Hindu participants held apuja, distributed langar among the participants and presented specialsaropay (a scarf presented in Sikhism to felicitate and honour someone) and gifts to the guests.

The temple is said to be around 1,200 years old and possessed by a converted Hindu family that, claiming to be the property owner, filed a case in the civil court in 2010-2011. In the first week of July, the court admitted the ETPB was the sole owner of the property after which the board retrieved its possession.

The PHMMC members surveyed the renovation and construction work and appreciated the ETPB’s efforts for the purpose, said Mr Amir Hashmi, the ETPB spokesman.

Additional Secretary (Shrines) Rana Shahid was the chief guest at the event, which was also attended by ETPB Deputy Secretary Faraz Abbas and other officials as well as PHMMC President Krishan Sharma, General Secretary Diwan Chand Chawla and committee member Amarnath Randhawa and others from across the country. Christian community leader Jacqueline Tressler and Minhajul Quran’s Sohail Rana were also present on the occasion.

Earlier, a meeting of the temple management committee was held under the chairmanship of ETPB Chairman Habibur Rehman Gilani at the board’s office, where all the members through a unanimous resolution lauded the ETPB chairman and the shrines administration, courts and judges for retrieving possession of the historic Valmiki temple and initiating renovation and other administrative measures. They said they had got the opportunity to come here and pray after 20 years.

Mr Gilani assured the committee members of protecting Hindu temples and taking appropriate measures for the welfare of the Hindu community. In light of the directions of the federal government, the ETPB is making utmost efforts to protect, rehabilitate and renovate religious sites of Hindus and Sikhs.

Talking to Dawn, PHMMC President Sharma said it was a goodwill gesture and also a step towards mainstreaming the community and should be applauded. “As a Pakistani Hindu, two things that Hindus and the insulated community fear here: freedom of faith or belief regarding which there were questions socially, politically, administratively, and secondly social protection. In India mosques are getting deserted, people are being harassed, whether they are Dalits or Hindus. While in a country created in the name of Islam, temples are reopening every other day.”

The Valmiki sect of Hindus are a poor segment of society who have no say or access, Mr Sharma explained, adding they had regained access to this temple now. “The role of Valmikis is very significant in Hindu mythology; had they not written the Ramayan, no one would know Ram. Earlier, this temple was not being used for worshipping, those possessing it didn’t allow anyone to enter. But now, every Hindu can come in and pray,” he added.

Mr Sharma further said the historic Prahlad temple in Multan that was destroyed in the early 90s after the Babri Mosque incident was being rehabilitated and renovated; it is crucial to the Hindu festival of Holi. “We’re making efforts to promote religious tourism and rehabilitate many other temples and religious sites across the country. There are issues everywhere in the world, which are exploited by inimical forces in the region. So, such steps could silence them and counter their narrative.”