No plan to withdraw administrative, financial powers from AJK: Kaira 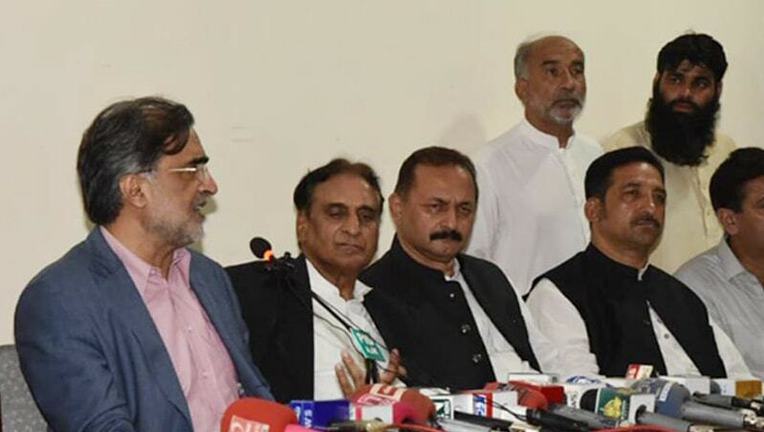 MUZAFFARABAD: Prime Minister’s Adviser for Kashmir Affairs and Gilgit-Baltistan Qamar Zaman Kaira on Wednesday asserted that there were no plans to withdraw the financial, administrative or any other authority already given to the Azad Jammu and Kashmir (AJK) government “except for removal of some anomalies in AJK Constitution”.

“I belong to the Peoples Party which has a special bondage with Kashmir and Gilgit-Baltistan, more than anyone else in the country. We are the ones who have given constitutions and rights, who have rectified wrongs in them. We believe in devolving powers and not centralising them,” Mr Kaira said in a press conference at the Central Press Club.

He was flanked by three AJK lawmakers from his party, including Leader of the Opposition Chaudhry Latif Akbar, and scores of other party workers.

After Mr Kaira was asked to clarify position on a draft of 15thconstitutional amendment that his ministry had recently floated, he said he was unable to understand why a storm in the teacup had been created on this issue.

He claimed that the draft had been prepared during the PTI and PML-N governments in Islamabad and Muzaffarabad, respectively.

“I have just thrown it open so as to solicit suggestions from the stakeholders to remove anomalies in the [AJK] Constitution because the constitution and laws are living documents and should keep on undergoing amendments in accordance with the demands of the time and situation,” he said.

However, later at an informal talk in the club president’s office, when Mr Kaira was asked what was his take on the draft, he said since he had not gone through it in totality he could not immediately make a precise statement about it.

“Whatever the proposed amendments, they cannot and will not come into force unless agreed to by your [AJK] government and political parties and subsequently approved by the AJK Legislative Assembly,” the prime minister’s aide said.

Responding to questions, he said every politician and political party in Pakistan, including Imran Khan, had as much connection with the Kashmir issue as the Kashmiris themselves had with it.

“But my party carries a distinction. It was founded for the cause of Kashmir,” he added.

When a senior reporter asked if India’s Aug 5, 2019 move was a “fixed match” [with Pakistan], he replied: “This is a sensitive issue and I should not talk about it randomly.”

In the same breath, he added that in his view no Pakistani politician, including Imran Khan and Ziaul Haq, was the enemy of Pakistan. Their wrong decisions, wrong steps may have harmed the interests of the country, but intentionally no one is the enemy,” Mr Kaira said.

In response to a question, the adviser claimed that the AJK council was bereft of funds and “its employees were drawing salaries from the federal government in the shape of grants”.

However, his reply was in sharp contrast to factual position, as since the passage of 13thamendment in June 2018 funds for payment of salaries and allowances to council members and employees were allocated in the AJK’s budget.

Replying to a question on the prohibited funding case, Mr Kaira said the law would take its course [in this regard].

“We are neither accelerating nor delaying it,” he said.