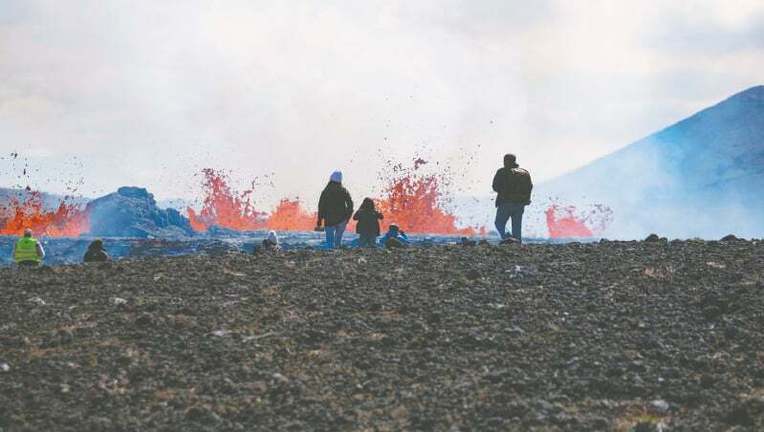 FAGRADALSFJALL: Curious onlookers made their way on Thursday to the site of a volcano erupting near Iceland’s capital Reykjavik to marvel at the bubbling lava, a day after the fissure appeared in an uninhabited valley.

The eruption was around 40 kilometres from Reykjavik, near the site of the Mount Fagradalsfjall volcano in southwestern Iceland that spewed magma for six months between March and Sept 2021.

While last year’s eruption was easily accessible on foot and drew more than 435,000 tourists, the new eruption is trickier to access, requiring a strenuous 90-minute hilly hike from the closest car park.

Despite that, more than 1,830 people visited the site on the first day of the eruption, according to the Icelandic Tourist Board, and more visitors were seen trekking to the scene early on Thursday. Among them was American tourist Hather Hoff, 42, for whom seeing lava was “a life goal”.

“I had to sit down and have a little cry because it is so beautiful, so emotional -- this is the raw power of our planet,” she said. Anita Sauckel, a 40-year-old German living in Iceland, visited last year’s eruption and could not resist witnessing the latest volcanic activity.

“This is special with the lava, huge fountains popping out in the middle, and I love that a lot,” she said.

The fissure was estimated to be around 360 metres (1,181 feet) long, the Icelandic Meteorological Office said, with lava fountains about 10-15 metres high.

Wednesday’s eruption was preceded by a period of intense seismic activity, with about 10,000 earthquakes detected since Saturday, including two with a magnitude of at least 5.0. The frequency of the earthquakes has slowed since the magma burst through the ground.