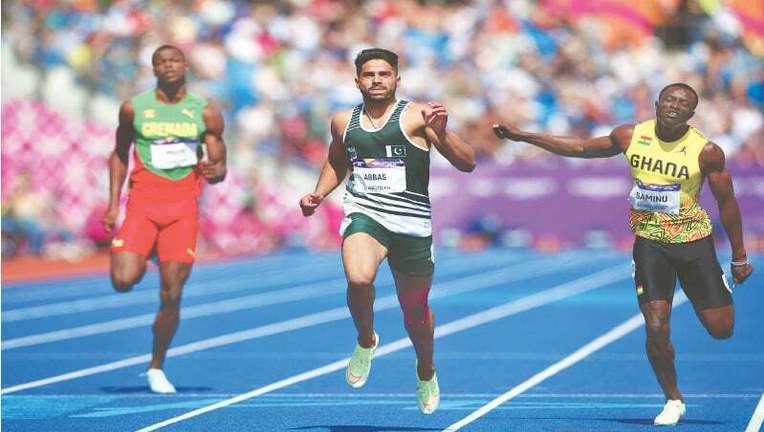 BIRMINGHAM: There was no catching Shajar Abbas in his 200m heat at the Commonwealth Games on Thursday.

Putting aside the disappointment of missing out on the 100m semi-finals by the narrowest of margins two days earlier, Shajar made sure he left nothing to chance this time.

He won his heat at the Alexander Stadium in a time of 21.12 seconds to confirm his berth in Friday’s semi-finals. The final is scheduled for Saturday.

“Now, I’ll try my best to qualify for the final,” Shajar told reporters.

Shajar had missed out on the 100m semi-finals after finishing fourth in his heat. With the top two in each heat of that event advancing alongside the seven who posted the best times, the 22-year-old missed out despite having a better time than one athlete who qualified.

For the 200m, the top two in each of the eight heats were to qualify for the semi-finals along with the next eight fastest sprinters and Shajar was one of eight winners on Thursday.

At the 100m mark, Shajar trailed Nigerian Udodi Chudi Onwuzurike — the World Under-20 champion — and Abdul Rasheed Saminu of Ghana.

But then he put on his afterburners, pulling level with Saminu by the 150m mark and then overhauling Onwuzurike in the last 25 metres, beating the Nigerian by 0.06 seconds at the finish line. Saminu was third in 21.32.

Overall, Shajar — who holds a national record of 20.87 in the 200m — was 12th among the 57 sprinters who finished and he will be up against a top field in the semis.

Four years after being disqualified in the last edition on Australia’s Gold Coast for impeding a rival before crossing first in the 200, England’s Zharnel Hughes posted the fastest men’s heat time of 20.30.

Trinidad and Tabago’s Jareem Richards, who was promoted to the gold medal on the Gold Coast after being impeded by Hughes, qualified fourth fastest in 20.68.

Pakistan’s athletes were basking in the afterglow of their first medals at the Games on Thursday after weightlifter Nooh Dast­agir Butt won the men’s +109kg final and judoka Shah Hussain Shah bagged bronze in the -90kg event the previous night.

The men’s doubles squash team of Nasir Iqbal and Tayyab Aslam were also victorious on Thursday at the University of Birmingham.

The Pakistan duo swatted aside Ghanaians Evans Ayih and Clement Anafo 11-1, 11-1 in 12 minutes to reach the round of 16.

Over in the badminton court at the National Exhibition Centre, Pakistan saw two of its players fall in the round of 32.

Mohammad Irfan Saeed Bhatti proved no match for fifth-seeded Malaysian Yong Tze Ng as he fell 21-10, 21-9 in the men’s singles.

His compatriot Ghazala Siddique exited the women’s singles competition after losing to Tahila Richardson of Jamaica 21-14, 21-15.

On Friday, Shajar will not be the only athlete Pakistan will have its eyes on.

Fahad Khawaja, the country’s number one table tennis player, will be up against England’s Paul Drinkhall for a spot in the last 16.

Fahad was imperious as he swept through the group stage on Wednesday night, winning all his three matches.

He opened with a 4-0 victory over Guyana’s Christopher Franklin and then beat Mohtasin Ahmed of Bangladesh 4-1 before wrapping up Group 15 by cruising past Darren Douglas of Trinidad and Tobago.