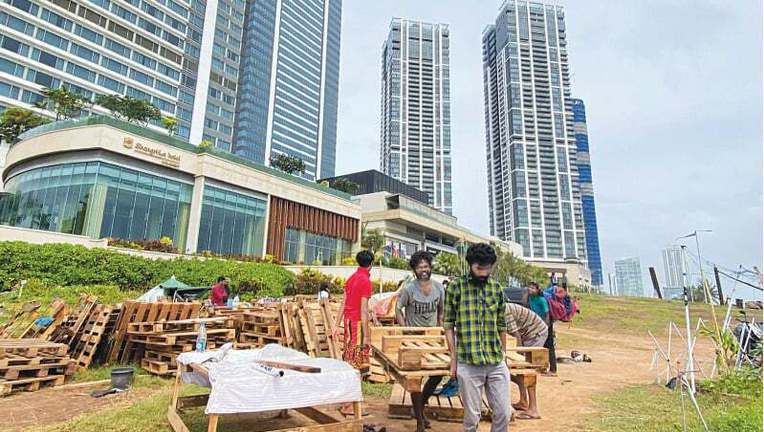 COLOMBO: A potential Inter­national Monetary Fund bailout for Sri Lanka could be delayed if its creditors — the largest being China — do not agree on concessions, the country’s president warned on Friday.

A crucial debt restructuring — with the countries to which it owes billions agreeing to write off some of their dues — is a pre-condition before the IMF will approve a bailout for the country, where inflation is rampant and shortages of essentials widespread.

“Until you come to an agreement among the official creditors, it is not possible to go to the London Club,” Ranil Wickremesinghe told a forum, referring to subsequent debt talks with commercial lenders.

President Wickremesinghe did not name a single country, but analysts said he was referring to China, the largest single bilateral creditor, which is owed over 10 percent of Sri Lanka’s foreign debt.

Officials say that clinching an agreement with Beijing is crucial, but China has not publicly shifted from its offer of more loans rather than taking a haircut on existing credit.

The IMF is likely to insist on painful reforms as part of any bailout, and Wickremesinghe warned: “It may be bitter, but any medicine for recovery is bitter. You have to take injections.”

Previous presidents, including his immediate predecessor who fled abroad and resigned last month, borrowed heavily from Beijing for infrastructure projects, most of which became white elephants.

Analyst Victor Ivan said debt talks could be leveraged by Beijing to extract concessions in the South Asian country, which has become a geopolitical hotspot.

Unable to pay back a $1.4 billion loan, Colombo handed a Chinese-funded and — built deep sea port to a Beijing company in 2017 on a 99-year lease.

“China has done it in the past, but to do it so openly now could backfire on them due to Sri Lanka’s circumstances,” Ivan said.

Beijing has publicly offered Colombo more loans to pay off its debt to China, a move that is not acceptable to other creditors who want all lenders treated equally.

“Renegotiating the Chinese debt could be a sticking point,” former Central Bank of Sri Lanka deputy governor W. A. Wijewardena said. “There will have to be hard bargaining with them.”

The US appeared to nudge Sri Lanka’s creditors to cut a deal on their debts.

On the sidelines of an Asean meeting on Thursday, US Secretary of State Anthony Blinken said an IMF bailout “requires appropriate debt restructuring that has to be done on an equitable basis with all of the creditors doing what’s necessary”.

Sri Lanka defaulted on its $51 billion foreign debt in mid-April and sought talks with the IMF.

The country has also borrowed heavily from India this year to battle fuel shortage. Delhi is yet to declare its stance on restructuring.