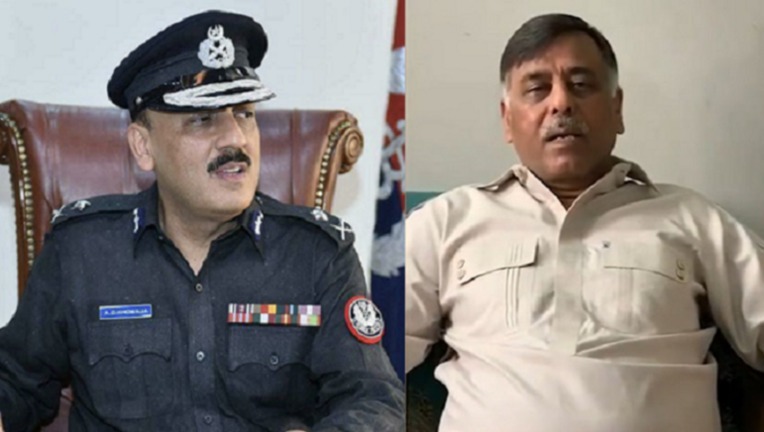 KARACHI: The Sindh High Court on Friday issued a notice to former Malir SSP Rao Anwar on a lawsuit filed by former inspector general of police (IGP) A. D. Khawaja, who is currently serving as a grade-22 officer of Police Service of Pakistan, against a defamatory interview on a private news channel.

A single-judge bench headed by Justice Syed Hasan Azhar Rizvi also restrained the former SSP or anybody else acting on his behalf from repeating, circulating and broadcasting the defamatory interview till Aug 31.

The former police chief of Sindh alleged that Rao Anwar was involved in extrajudicial killings and during his time as the IGP he was completely unhappy with him due to his disobedience, misconduct, extra-departmental influences, high-handedness, involvement in land-grabbing and collusion with reti, bajri mafia.

In the lawsuit, Mr Khawaja submitted that he was a respectable police officer of BPS-22 and currently posted as the commandant at the National Police Academy at Islamabad.

Representing Mr Khawaja, Advocate Amna Usman argued that the plaintiff had challenged the illegal and mala fide conduct of the defendant in giving the defamatory interview against him at a talk-show on a private news channel on June 18.

She stated that the defamatory and scandalous interview of the defendant against the plaintiff was also available on YouTube and other social/digital media platforms.

She contended that the intention of the defendant while giving the impugned interview was to ridicule the plaintiff and to make unjust criticism not only on Mr Khawaja but also against the former chief justice of Pakistan.

The counsel stated that the defendant was allegedly involved in numerous cases of extrajudicial killings including the killing of Naqeebullah Mehsud in a staged encounter.

The plaintiff in the suit submitted that he had an unblemished career of over 35 years and had served as the IGP-Sindh from 2016 to 2018.

He contended that in the impugned interview, the defendant had levelled false and baseless allegations against him about alleged misuse of his powers in the formation of an inquiry committee by selecting members of his choice to probe into the extrajudicial killings by the defendant.

It was further contended in the lawsuit that during the impugned interview, the defendant also alleged that the father of the deceased Naqeebullah was summoned to Karachi by the plaintiff by sending a vehicles of the Sindh police as he was not willing to come, and register a case against the defendants and others.

The plaintiff submitted that all the allegations were patently false, unverified and outrightly mala fide as the inquiry committee to probe into the allegations of extrajudicial killings was made in accordance with law and the selection of the members and the report of the committee had not been challenged by the defendant in any court.

He further argued that the FIR was lodged on the request of the father and friends of Naqeeb and the vehicles were provided as they had apprehended serious threats to their life from defendant and his team.

The plaintiff also strongly refuted to have entered into any conversation with the defendant regarding killing of criminals he had apprehended and argued that in fact, the plaintiff was completely unhappy with the defendant due to his disobedience and misconduct on many accounts due to his extra-departmental influences, high-handedness, involvement in land-grabbing and collusion with reti, bajri mafia.

After a preliminary hearing, the bench in its order said: “Let notices are to be issued to the defendant through all modes except publication. In the meantime, the defendant and /or anybody else acting for and on behalf of defendant are restrained from repeating, circulating, broadcasting and publishing the defamatory interview dated 18.06.2022 subject matter of this suit and or any clip or content or extract from that defamatory interview and /or making any other defamatory, malicious and scandalous material/content against the plaintiff in social, digital and print media, till next date of hearing.”