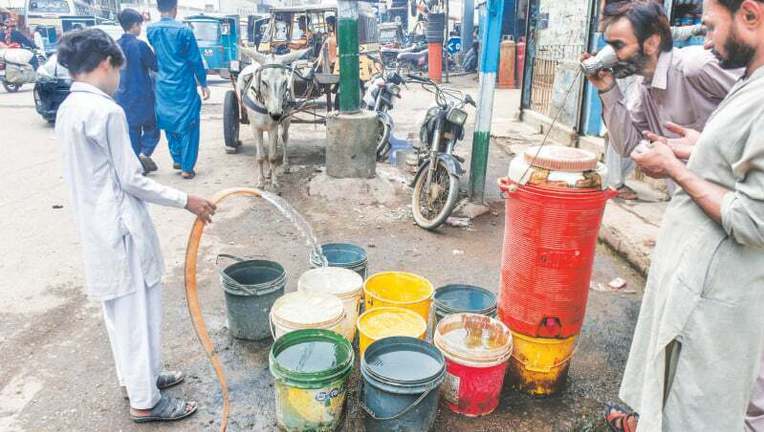 KARACHI: Lyari’s water problem, and those of similar settlements across Karachi, cannot be resolved by only augmenting water supply as often stated in public discourse and water utility plans. Rather, institutional structures and policies are needed to ensure equitable access to existing water supply system, says a study recently published in an international journal.

It demonstrates how poor performance of the Karachi Water and Sewerage Board (KWSB) has led to severe inequities in water access in Lyari, forcing the poorest to spend the most for the least volume of water and compromise on the quality of life in pursuit of water.

Titled Beyond water scarcity: Water (in) security and social justice in Karachi, the research is published in the Journal of Hydrology: Regional Studies.

It is authored by Dr Hassaan F. Khan, Assistant Professor of environmental sciences at Habib University (HU) and Director of the Karachi Water Project, and Syed Ali Arshad, a Habib alumnus, while the field work was done by university’s undergraduate researchers.

The study quantifies how limited access to the water network contributes to household water insecurity beyond just a “shortage” of water which tends to hijack almost all discourse on water in Karachi.

In the first phase, 465 household surveys across Lyari’s 11 union councils were conducted and analysed, followed by interviews and participant observations.

According to the study, only about 28 per cent of dwellings in Karachi (where nearly half the population lives in informal settlements) have reliable access to municipal piped water.

Public discourse, it says, understands Karachi’s burgeoning water crisis through reasons like dwindling reserves and a growing demand-supply. This dominant narrative of water scarcity has swayed attention away from how poorer populations have to involve in alliances/conflicts for access to water on a daily basis.

“Weak urban water governance in Lyari contributes in pushing vulnerable sections of the population further to the margins. The intermittent piped water supply in Lyari is inadequate, unsafe, unreliable and inconvenient,” it said, and added: “This forces many households to resort to additional costlier and inconvenient sources of water and leads to severe inequities in water access. Lower-income populations are especially affected and pay disproportionately higher amounts for a much lower water consumption.”

According to the study, Lyari with an approximate population of 660,000, grew as a largely informal settlement, which was regularised only after the 1970s, where the new government provided 90-year leases to households, and allowed Lyari to be considered in the city’s water infrastructure plans.

The water quality tests for bacterial contamination from 79 selected households in sample population reinforce these findings: an alarming 92.4pc of households’ drinking water tested positive for presence of Total Coliform; 77.2pc of these households drinking water samples showed presence of E-coli, which is a primary cause for several waterborne diseases.

Despite this, a sustained culture of lax governance by state institutions allowed the region to become a “gray zone of state power” categorised by rule of criminal syndicates, practices of political patronage, and a dramatic growth of illegal high-rise apartments.

“Consequently, amenities like water supply were influenced by these actors and developments, causing marginalisation and displacement of certain communities: whilst the groups with better social/political capital were able to settle in areas with better water access, the poorest communities, such as the native Sindhi Mahigeer community and the rural-urban migrant Zikri community continued living in regions in the southwestern wing with poor access to piped water,” the study says.

For all surveyed households with piped water connection, the median for total water supply per week is only 3.5hours.

“Several hours spent daily in collection and transportation of limited quantities of water can cause bodily and emotional distress, especially among women compromise personal hygiene, and prevent pursuit of opportunities that can result in improved outcomes, such as economic activities and education,” the study says.

As many as 95pc of all the households that have to travel for water, complained about physical exhaustion caused by activities, including carrying large quantities of water in hand, on back or over their heads on a daily basis, as well as having to stand in lines, especially during scorching weathers during summer season.

Finally, when residents are unable to access enough water through either piped supply or other free sources, they have to resort to using the readily available, albeit considerably more expensive sources like tanker service, Mushki, and other vendors.

The study points out that KWSB is not able to generate sufficient revenue for any improved services. Survey results show that as many as 80pc of all households with pipeline connections, two-thirds of whom get regular supply of water, do not receive a water bill.

In situations where households have maintained “illegal connections” or live in non-leased houses, officials claim that the KWSB is unable to send water bills.

However, even for households that do maintain a lease and have been provided authorised water pipeline connections, the majority continue to utilise water supply without receiving any bill. According to the water utility’s executive engineer for the region, such households have not “registered themselves with the service”.

“In other words, in order to get billed, the onus is actually on the consumers themselves to visit KWSB’s revenue offices and document their connection to the system,” the study says.