RAWALPINDI: A teenage boy was sexually abused allegedly by four other boys working with him in an auto-workshop in Race Course area.

The victim’s father, a resident of Mughalabad, lodged a first information report (FIR) with police saying that his 13-year-old son was sexually abused.

He added that one of the four boys held a knife up to the victim and then they all abused him one by one.

According to police, a case was registered against the four boys and they are yet to be arrested. 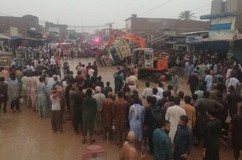