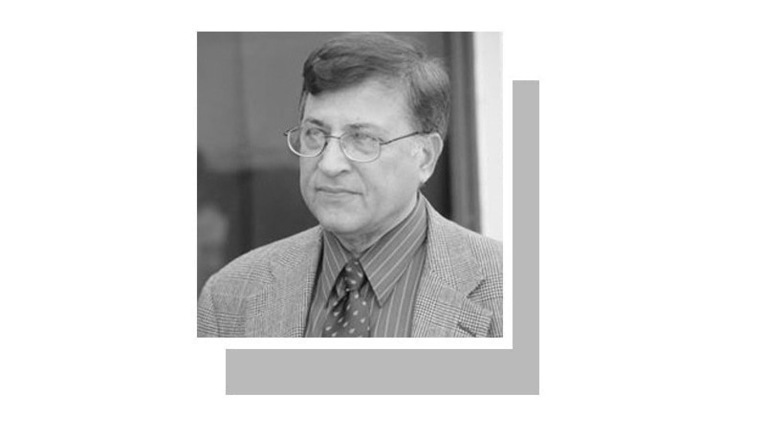 WITH monster floods and a third of Pakistan submerged, world figures have expressed sorrow and promised some aid. While actual needs are huge, this at least shows empathy with victims.

But within Pakistan public efforts are nowhere close to the massive, countrywide, readily organised ones that followed the 2005 earthquake. This underscores a sharp decrease of public trust in the state and its political leaders.

Squarely at fault are politicians who, instead of being fully engaged with emergency relief, have opted for cheap showbiz while continuing to bash one other.

Before taking a U-turn in the face of mounting public disgust, Imran Khan thundered that heatwaves, floods and wars cannot stop him from holding anti-government mass rallies. These would continue, he said, until the ‘thieves’ in the current ‘imported government’ were sent packing and Pakistan attained ‘haqeeqi azadi’ — a euphemism for his power grab. Nor would he gather funds for KP flood victims, he declared, because of his multiple philanthropic ventures like Shaukat Khanum Hospital.

When pressured, Khan changed his mind on this point too.

By now Khan’s uncountable U-turns are too commonplace to merit comment. Still, to single out Khan as a heartless self-seeker is a travesty. A recent Dawn op-ed underscored the damning lack of empathy all around.

Instead of meaningful acts of leadership there were only camp visitations and helicopter food-droppings. The relief circus’s star performers included Shahbaz Sharif on the high trapeze with Bilawal Bhutto-Zardari and Murad Ali Shah swinging just below. This black comedy was not quite hilarious.

Do these politicians assume our people to be so stupid that a photo op with village survivors will make them look good? Or expect the three-lakh-rupee per hour helicopter joyrides is good PR?

Pakistan will forever have rapacious leaders unless its people absorb universal human values and learn to think.

Past floods and disasters were no different. During the 2010 floods that left a quarter of Pakistan submerged, then president Asif Ali Zardari had his PR crew photograph him while embracing a crying woman at a relief camp in Sukkur. The next pit stop was Nowshera for another photo op before he accompanied UN secretary general Ban Ki-Moon on another helicopter ride to survey submerged farmland in south Punjab.

Zardari’s damage control was occasioned by public outrage that forced him to cut short his vacation in Europe. Although floodwaters were peaking, he and his entourage were enjoying his 16th-century chateau in Normandy, France. Built for the widow of King Philippe VI, it was his favourite spot for entertaining royalty. On the way back he had a quick photo op with French president Nicolas Sarkozy and British prime minister David Cameron.

Two days ago, emulating his party leader, PPP leader Manzoor Wassan toured the floods in Khairpur and fondly reminisced of his vacation time paddling the idyllic canals of Venice, Italy. He had not, of course, seen dead bodies floating around there.

Today’s tragedies are dwarfed by the still greater tragedy of 1947 when millions of refugees were pouring into Punjab. To resettle traumatised people who had lost family members and possessions was the crying need of the hour. But Muslim League politicians, who were mostly large landlords, were too busy seizing the lands of fleeing Hindus and Sikhs. Bitter power struggles were everywhere.

No infighting was fiercer than that between two landed aristocrats, Punjab’s chief minister Nawab Mamdot and finance minister Mumtaz Daultana. This threatened to split the Muslim League. Alarmed, terminally ill Jinnah ordered both ML stalwarts to Karachi where he sternly ordered them to desist. It worked for three weeks only.

Read: Politics in times of calamity

But it is the Bhola cyclone of 1970 which, more than anything else, exposed the rapaciousness and incompetence of West Pakistan’s elite and set the stage for the 1971 breakup. The deadliest cyclone of recorded history, it killed 0.5 million East Pakistanis. In terms of lost lives this makes it 300-500 times more destructive than today’s flood.

Reporting in West Pakistan, however, was sparse. Anger soon grew at Gen Yahya Khan’s insensitive and inept martial law administration that watched and did little except call for international aid. That aid, said Yahya, the army would alone disburse. Every Bengali knew what this meant.

Pakistan has been cursed with leaders, civil and military, who have run it down to successive lows. One cannot conceive it producing a statesman like Mikhail Gorbachev. When he died a few days ago at age 91, even ideological foes did not accuse him of power or money hunger. None deny that he brought the Cold War to a relatively peaceful end instead of a wild shootout with a flailing Soviet Union unleashing its nuclear weapons.

Still harder to imagine is a Pakistani version of Jacinda Ardern who in 2019 rushed to the scene of mass shootings at a mosque and declared in words that still ring loud: they are us. Had the likes of her been Pakistan’s prime minister today, the government response to the floods would have been entirely different.

In the ultimate analysis, leaders reflect the values and quality of their followers. The famous Milgram experiments of 1961, confirmed thereafter by Asch and other psychologists, help understand how leaders are chosen. Briefly: a subject (read, party supporter) often has neither ability nor expertise to make decisions. Especially in a crisis, he leaves this to his group and its leader. Obedience relieves him of taking personal responsibility. One part of human nature is to be sheep.

Pakistan’s only defence against venal, rapacious, or ideologically charged leaders is for its population to absorb universal human values and accept the rule of law. Once our people take these as seriously as they take religious rituals, the tide of battle will turn.

The writer is an Islamabad-based physicist and author.