KARACHI: Being made to feel insecure and afraid for their lives, many transgender persons are fleeing Peshawar following the recent attack on a few members of the transgender community there.

The attack involved unidentified assailants opening fire on five transgenders returning in their car from a musical evening in Peshawar on Sept 11. Three of them — Dolphin, Ayan and Naina Khan — and their driver Hussain Khan were injured in the attack as the men fled from the spot. The injured were taken to Lady Reading Hospital following the attack. Later, Dolphin and Ayan were discharged along with their driver, but Naina is still in hospital.

“Naina is our guru [mentor],” another transgender ‘Mano’, who is also eyewitness to the crime, told Dawn.

Mano has now fled Peshawar to come to Karachi as she is afraid for her life.

“We are all afraid. We have never even harmed a fly in our lives and here there are people wanting to see us dead. We are receiving threats over the phone. And the threats have not stopped even now after we have left Peshawar,” said Mano.

“It is not easy to uproot and leave your home just like that and leave a place where you were earning a living. I moved to Peshawar four years ago. Now I’m trying to start afresh in Karachi,” she said.

Narrating the incident of the night of the attack in Peshawar, Mano said that they were going home in two cars following a dance performance at a function in Peshawar when the car ahead in which their mentor, Naina, was travelling along with two more members of their community came under attack.

“It all happened on the road. We were taking the flyover when we heard firing followed by sparks. All of us ducked and our driver reversed the car. The assailants were firing from above, from the highest point of the flyover. Unfortunately, since the driver in the car ahead was also injured, he couldn’t get out of harm’s way like we did,” she said.

“Hearing about it all, I started getting calls from home to come back. I’m originally from Karachi, but I had never performed at functions in this city because I did not want to embarrass my family. When they called and begged me to come back home, I did. They have accepted me the way I am. I thank God for family support, but I miss Peshawar where I had established myself. Other members of my community have also left Peshawar. Some went to Mansehra as they were originally from there, some have come here,” said Mano.

“I’m not very educated, I perform at functions to make a living. It is not easy for me to start afresh in a new city. I am not sure what I will do in Karachi. I want to return to Peshawar to at least see my guru who is still in hospital. But the threatening phone calls have not stopped even after my leaving,” Mano informed.

According to the last population census, Pakistan is home to over 10,000 transgender persons.

The transgender community is routinely subjected to targeted attacks. As many as seven transgenders have been murdered in the last five months in Khyber Pakhtunkhwa alone, and according to transgender activists, 87 were killed there over the last seven years.

Facing harassment is a part of their existence and now they are also afraid for their lives. Most transgenders have no place to go, too, as their own families have turned their backs on them. There are very few who are as lucky as Mano who have returned home. The others only have each other to turn to.

According to the director of Gender Interactive Alliance (GIA), Bindiya Rana, there needs to be more awareness regarding transgender and their rights in Pakistan.

“But what to do when people who should be spreading awareness and safeguarding human rights are themselves responsible for spreading hate? They have made our rights an issue of religion and Islam,” she told Dawn.

“There is a maulvi, there is a senator, there is a leader of a jamaat saying that the Transgender Persons Protection of Rights Act of 2018 goes against Quran and Sharia. Then even if the government rejects all criticism about the bill, the people will still be after our lives,” she said.

“Without even studying the bill, the senator says that it is about changing genders, men becoming women, etc. He had no proof of this. Nadra [National Database and Registration Authority] is only giving us transgender an ‘X’ instead of ‘M’ for male or ‘F’ for female [on the CNICs] and he says that men are getting their gender changed,” she pointed out.

“We need identity cards for education, for health, to open bank accounts to get decent jobs, that’s all. And here they are spreading all this confusion about same gender marriages,” she added.

“And as if these false accusations weren’t bad enough, there are the kids making TikTok videos about transgender to spread more hatred for us,” Rana said.

“You have quota systems, reserve seats in the assembly for minorities, but there is nothing happening for transgenders. Then this bill came about and everyone turned against us. There are so many people affected by the recent floods in the country, but these people would rather come after us than help them,” she concluded. 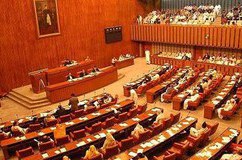