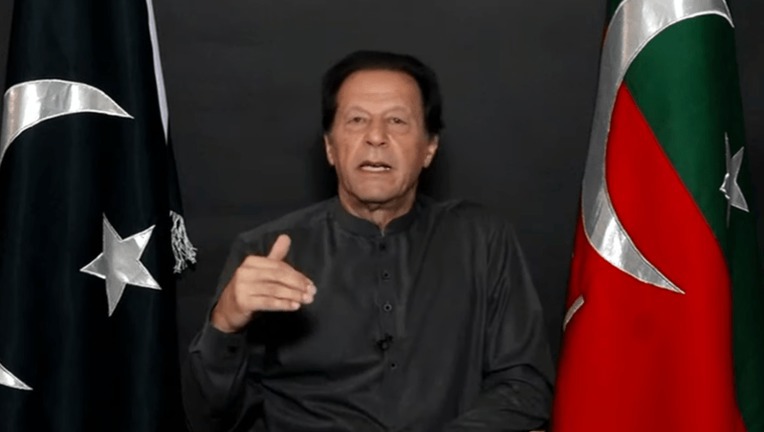 • Admits ‘mistake’ of rolling out amnesty schemes with no strings attached
• Says economy heading for default, snap polls only way out
• Demands powers that be explain ‘failure to foresee economic disaster’

KARACHI: Former premier Imran Khan said on Tuesday that real estate is the biggest mafia in Pakistan, as it grabs government land, sells it to the general public and then transfers the proceeds abroad.

“You can’t imagine how powerful they are,” said Mr Khan while addressing a seminar on Tuesday via video link.

Cadastral mapping, which shows land records with boundaries in digital form, ordered by the last PTI government, showed land worth Rs1.2 trillion had been encroached upon by the land mafia in Islamabad alone. “The situation is the same all over the country,” he said.

Holding a free and fair election was a prerequisite for reviving the economy, which was “heading for a default”, he said. “Whichever government comes in after the fresh election will have to take unprecedented decisions,” he said.

Mr Khan noted that political stability was necessary to achieve economic strength. “The economy requires certainty. People don’t invest unless they’re able to predict what’ll happen going forward. Who can predict today what’ll happen after one month in Pakistan? Nobody knows,” he said while referring to the rising level of credit default swaps, an indicator of investors’ confidence in the country’s ability to pay back dollar-denominated loans.

He also referred to a survey that said 88 per cent businessmen believed the economy was headed the wrong way. “The only way to restore confidence is holding a fresh election,” he said.

Mr Khan spent a large part of his speech highlighting the importance of exports for building a resilient economy that’s able to survive high growth rates while dodging the boom-bust cycle.

He acknowledged his “mistake” of rolling out multiple amnesty schemes without making it mandatory that the whitened money should then be invested in the export-led industry to build dollar reserves.

Mr Khan demanded the powers that be should explain their failure to foresee the economic disaster “that they caused” by staying “neutral” in the midst of an alleged regime change conspiracy.

“I sent Shaukat Tarin to tell the neutrals that the direct impact of political destabilisation would be on the economy. The (economic) balance was already fragile,” he said.

He estimated that the value of transmission and distribution losses in excess of 10pc amounted to roughly Rs170bn in 2021-22. Similarly, the under-collection of bills in the last fiscal year was worth about Rs230bn.

He said energy infrastructure requires modernisation, as most oil refineries are based on the old technology of hydro skimming with high furnace oil production. Moreover, as much as 70pc of oil transportation is done by road, which poses a safety risk and leads to higher fuel consumption, he said.

Port infrastructure for oil imports should also be upgraded, he said, while emphasising the need for building land-based LNG terminals as well as strategic petroleum reserves.

Mr Qureshi said a major increase in natural gas prices should be announced to economise its consumption. He also called for removing all cross-subsidies — money transfers to one business from the profit of another — in energy tariffs and implementing direct or targeted subsidies.