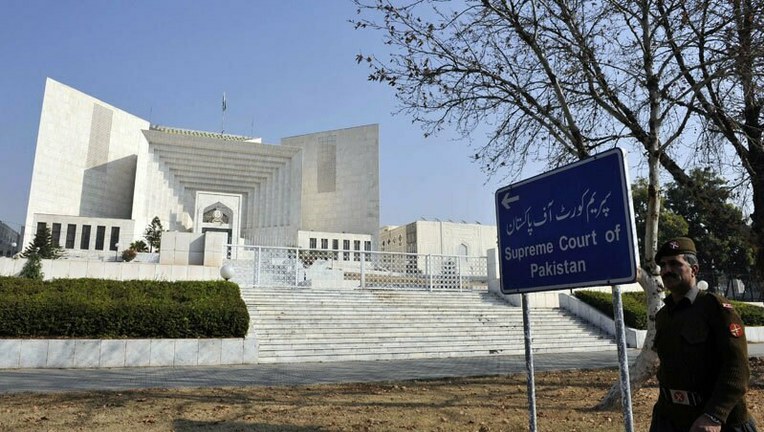 ISLAMABAD: The Supreme Court on Wednesday held that self-projection by holders of public office on government records and self-aggrandisement at public expense was not permissible.

“To name public/government properties and anything plan­ned, developed and/or managed from public/government funds or to project oneself … by getting one’s photograph affixed on the ‘Sanad-i-Haqooq Milkiat’ violates the Constitution, undermines Pakistan’s Islamic moorings, and therefore without lawful authority, and, if one may add, is also in bad taste,” said a five-page order authored by Justice Qazi Faez Isa.

The document in question, Sanad-i-Haqooq Milkiat (certificate of proprietary right), was issued by the Directorate General of Katchi Abadis in favour of slum dwellers in Punjab and carried the chief minister’s image.

“If someone names a public/government place or property after themselves or affixes their own name or image on a public/government document, it is self-glorification, and if this is done by others, it would constitute obedience, flattery, nepotism and/or corruption,” Justice Isa explained.

“Pakistan is not a kingdom, principality or fiefdom in which the people are to be beholden to their rulers.

“We must remain constantly vigilant in maintaining the cou­ntry’s independence and democratic credentials,” Justice Isa emphasised.

Politicians, and all those who render public service, are best immortalised for what they do in office because it may happen that during their lifetime, some undesirable fact might crop up and stain their reputation, the judge observed.

The issue cropped up during the hearing of an appeal against a decision by the Lahore High Court’s Rawalpindi bench on Oct 17, 2018, to allow private res­pondents to file a writ petition.

The petition was filed bec­ause a sub-registrar in Rawal­pindi district had refused to register sale deeds, leases and other documents of those who had acquired properties which were declared a katchi abadi by the Punjab government on Dec 14, 1989, under the Punjab Katchi Abadis Act.

These lands were declared as katchi abadi on a written request by the mayor of Rawalpindi on July 27, 1987.

Although the court declined the appeal, it picked up an ancillary matter that came to its notice.

The judgement explained that government properties, documents and funds must be used in a transparent manner and by observing prescribed standards of financial propriety in line with the Constitution.

“It must also be ensured that no advantage or benefit accrues to or is taken by any living person, as was done in this case by affixing the chief minister’s photograph on papers certifying ownership of properties.”

Justice Isa explained that the Constitution prescribes oaths of office for public office-holders, as well as the chief justices and judges of courts, in which they pledge not to allow personal interest to influence their official conduct or decisions.

Since affixing one’s own photograph on a government document projects personal interest, it is not permissible because it would violate one’s oath of office, the judgement said.

It is also not permissible to manoeuvre self-projection thro­ugh one’s subordinates, political associates or in a manner that may call for the bestowal of reciprocal favours.

Paid servants of the state, constitutional office-holders and politicians in government must not use their positions for personal, partisan or pecuniary gain, the order said.

“To name government prope­rties and anything planned, dev­e­loped or managed from public funds or to project oneself, as in the present case, by getting one’s photograph affixed on documents, violates the Constitu­tion, undermines Pakistan’s Islamic moorings, is without lawful authority, and also in bad taste.”

Government properties, documents and funds must be used in a transparent manner and in accordance with the prescribed standards of financial propriety, the judgement further said.

Justice Isa recalled the Cons­ti­tution mandated that holders of public office must exercise their power as a public trust.

“An apparent reason behind portraying the image of the chief minister could be to present him to the recipients of Sanads as their benefactor and thus cultivate in them a feeling of being beholden to him.

“If the said gentleman wanted to help the homeless, nothing prevented him from distributing his own property, and, had he done so, he would be at liberty to affix his photograph on the documents of title.”

The court ordered that copies of the judgement be sent to the Cabinet Secretary, the provinces’ chief secretaries, and to the Chief Commissioner of Islamabad Capital Territory with a directive they issue notifications to remind government servants that they serve the people, and not individuals in government.