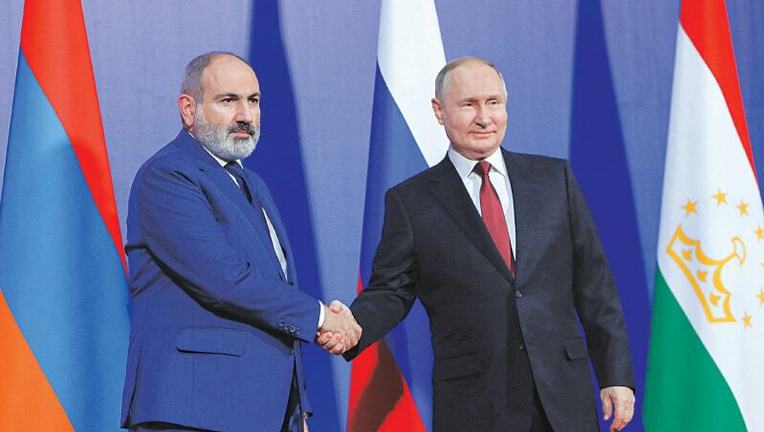 LONDON: The leader of Armenia vented his frustration on Wednesday at the failure of a Russian-led security alliance to come to his country’s aid in the face of what he called aggression by Azerbaijan.

Prime Minister Nikol Pashinyan called into question the effectiveness of the six-nation alliance, the Collective Security Treaty Organisation (CSTO), in pointed opening remarks to a summit as Russian President Vladimir Putin looked on.

Russia, the dominant player in the CSTO, has long been the main power broker in the south Caucasus region, bordering Turkey and Iran, where Armenia and Azerbaijan have fought two major wars since the collapse of the Soviet Union in 1991.

But as Russia struggles in its nine-month-old war in Ukraine, it risks losing influence in parts of the former Soviet Union that it has long seen as its sphere of influence. Fighting flared in September between Armenia and Azerbaijan, and the two sides said more than 200 soldiers had been killed.

“It is depressing that Armenia’s membership in the CSTO did not deter Azerbaijan from aggressive actions,” Pashinyan said.

“Right up to today we have not managed to reach a decision on a CSTO response to Azerbaijan’s aggression against Armenia. These facts do grave harm to the image of the CSTO both inside our country and outside its borders, and I consider this the main failure of Armenias chairmanship of the CSTO.”

Armenia sent a direct request for assistance from the organisation in Sept­ember, which was met only with a promise to send observers. Pashinyan contrasted that with the alliance’s rapid decision in January to send troops to another member state, Kazakhstan, to help Pres­ident Kassym-Jomart Toka­yev survive a wave of unrest.