KARACHI: The Sindh government has demanded that the federal government enact a new gas allocation policy to meet the actual needs of the province in the energy sector, it emerged on Saturday.

In a letter to Petroleum Minister Musadik Malik, Sindh Energy Minister Imtiaz Ahmed Shaikh asked him to resolve the issue of shortage of electricity and gas in the province, saying: “It has been observed with concern that injustice is being committed with the province of Sindh on the issues of gas and electricity and fulfilment of its demands.”

He said there was an acute gas shortage in the province and the short supply and loadshedding of gas had been going on for many years.

“People of Sindh are facing severe problems due to this gas loadshedding and low pressure and industries, especially in Karachi, are facing closures,” he said, adding that the acute gas shortage was creating feeling of deprivation among the people of the province.

He said that the provisions of Article 158 of the Constitution had been raised several times before the Federation, but the federal institutions were unable to implement the Constitution.

Mr Shaikh demanded the inclusion of representatives of Sindh in the institutions of the federal regulatory authorities and said that the grievances of the provinces would be redressed and the feeling of deprivation would end with provincial representation in the regulatory institutions.

The minister wrote: “I, therefore, earnestly request you to please consider the genuine issues of the province sympathetically, constitutionally and initiate necessary action for making a new independent gas allocation policy for the province and reconstitute the boards of federal energy regulatory bodies and entities by including the respective nominations duly recommended by the Government of Sindh.”

Talking to Dawn, Mr Shaikh said that the production capacity of electricity was continuously increasing through thermal coal, wind and solar projects in the province.

He hoped that this capacity would increase to 100,000MW in a few years, adding that it was not hidden from anyone that only Sindh had the solution to the energy crisis in the country.

He said that in view of the energy shortage in Sindh, the provincial government demanded immediate action to formulate a new policy to allocate more gas to the province so that the real needs of the province in the gas sector could be met.

The Sindh High Court has expressed serious resentment over the federal secretary of ministry of finance for not releasing Rs660 million for gasification of villages in Sindh despite several directives and reissued a show-cause notice to the secretary for repeated non-compliance with court orders.

The SHC also sought reports from deputy commissioners concerned about rehabilitation of flood-affected people in Sindh, including provision of tents, rations and blankets as the winter is approaching.

A two-judge bench headed by Justice Mohammad Karim Khan Agha in its order noted that the SHC had directed the secretary in May to provide funds to the Sui Southern Gas Company (SSGC) for the purpose of gasification and in August the court had issued a show-cause notice with the direction to appear in person for not complying with its order.

It further noted that despite the last order passed around three months ago, the amount had still not been credited in the account of the SSGC which the bench found rather inexplicable.

Moreover, the bench said that the secretary was also called absent without any intimation and he had not even bothered to give reply to the show-cause notice instead sent a joint secretary.

“This conduct on his part is highly deprecated by this court and the secretary finance shall ensure to appear before this court on the next date of hearing along with his reply to show cause notice which the office shall re-issue and sent to him as well as report under his signature that the money has been credited into the bank account of SSGCL”, it added.

The bench warned that if the secretary failed to appear in person Dec 19, and instead sent someone else on his behalf, the court might take action against him under the law.

Earlier, the bench had appointed senior lawyer Makhdoom Ali Khan as amicus curie to assist it on some facts and particulars concerning with Article 158 including the question on authority of the federal government taking gas from Sindh without permission of its government. 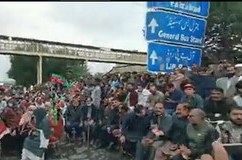 Rawalpindi remains paralysed for third day due to sit-ins