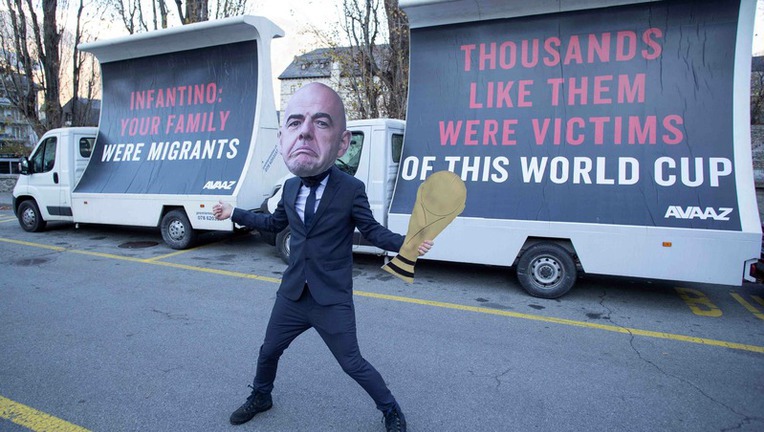 The mobile billboards carried the messages “Infantino: your family were migrants, Thousands like them were victims of this World Cup”, and “Compensate them now”.

The protest by the Avaaz campaign group included an Infantino impersonator holding a World Cup trophy.

Qatar, where foreigners make up most of the 2.9 million population, has faced intense criticism from human rights groups over its treatment of migrant workers.

FIFA had no direct comment on the protest but pointed to comments by Infantino last month hailing a fund that Qatar set up in 2018 that has paid out $350 million to workers in cases mainly linked to late or non-payment of wages.

Britain’s Guardian newspaper reported last year that at least 6,500 migrant workers — many of them working on World Cup projects — had died in Qatar since it won the right in 2010 to stage the World Cup.

The International Labour Organisation has questioned that number, which it said included all deaths in the migrant population. Qatari World Cup organisers have said that there have been three work-related fatalities and 34 non-work-related deaths among workers at World Cup 2022 sites.

Amnesty and other rights groups have led calls for FIFA to compensate migrant workers in Qatar for human rights abuses by setting aside $440 million, matching the World Cup prize money.

FIFA has said it was assessing Amnesty’s proposal and implementing an “unprecedented due diligence process in relation to the protection of workers involved”.

The EU parliament last month approved a resolution that calls on FIFA to help compensate the families of migrant workers who died, as well as workers who suffered rights abuses, during preparations for the World Cup.