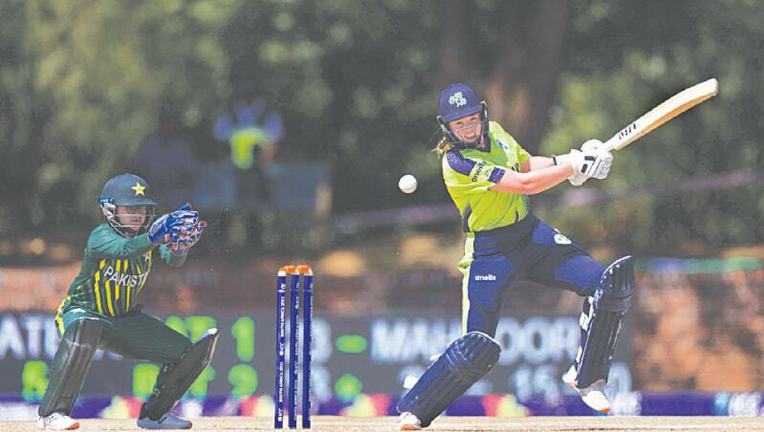 POTCHEFSTROOM: Pakistan beat Ireland by seven wickets in a crucial Super Six fixture on Monday to continue their impressive run at the ICC Women’s U-19 T20 World Cup.

The side made it to the Super Six stage after beating Rwanda and Zimbabwe in the preliminary round matches and a win in their next match — against New Zealand — will significantly increase their chances to make it to the semi-finals of the tournament’s inaugural edition.

Against Ireland, Pakistan chased down a 114-run target with 15 balls to spare as in-form opener Eyman Fatima smashed 25 runs off 17 balls, with the help of four fours and a six. Shawaal Zulfiqar, on the other hand, hit three fours for her 20-ball 18.

Both batters fell off successive deliveries to leave Pakistan struggling at 44-2 in the seventh over before captain Syed Aroob Shah added 35 off 25 with four boundaries.

Aroob was dismissed in the 15th over when Pakistan needed 14 in four overs but Warda Yousaf (24 not out) and Laiba Nasir (seven not out) carried Pakistan over the line with ease.

Earlier, Anoosha Nasir took 2-17 and Rida Aslam bagged 2-26 as Ireland scored 113-7. Annabel Squires was the pick of the Ireland batters with an unbeaten 55 off 52 balls, which included five fours.