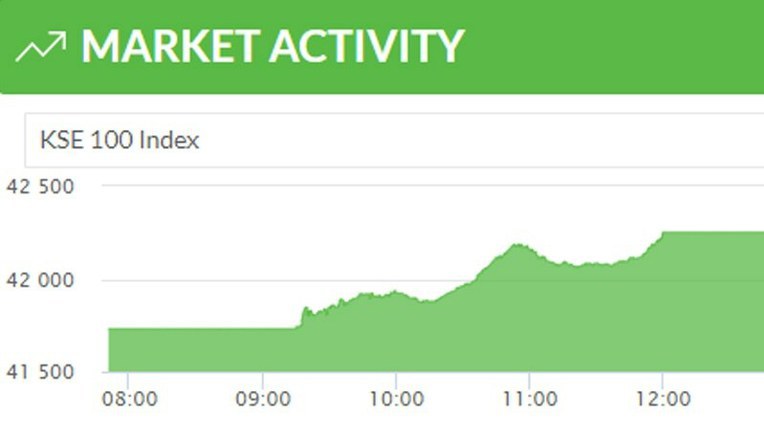 "The results of the FATF plenary session are expected later today. Expectations of a positive outcome are leading the KSE-100 higher today," he said.

Salman Naqvi, head of research at Aba Ali Habib Securities, shared similar views, saying most of the purchases today had been made by financial institutions.

"Big investors have bought blue-chip shares following reports of Pakistan's removal from the FATF grey list," he said, adding that if the country is taken off the list today, he is expecting the index to cross the 43,000-mark in the next session.

Pakistan has been on FATF's increased monitoring list, or the grey list, since 2018 for deficiencies in its counter-terror financing and anti-money laundering regimes.

In its last plenary, held in Paris in March, the FATF noted that "Pakistan has completed 26 of the 27 action items in its 2018 action plan". The FATF encouraged Pakistan "to address, as soon as possible, the one remaining item, — investigating terrorism financing and targeting" senior leaders and commanders of UN-designated terrorist groups.

With the FATF's four-day plenary session due to conclude today, there have been reports that Pakistan would be finally taken of the body's grey list.

The rally witnessed in the stock market today is a continuation of its relatively positive momentum from the past two days, which, besides the possibility of Pakistan being taken off the FATF grey list, is being linked to the recent increase in fuel price prices — for the third time in 20 days.

The price hike was one of the conditions for the resumption of the International Monetary Fund's $6 billion loan programme, which has been stalled since April.

On Wednesday, Finance Minister Miftah Ismail announced in a late-night press conference that the government was increasing fuel prices by up to 29 per cent and said the prices of all petroleum products had now been brought to their purchase price and the element of subsidy or price differential claim had been eliminated.

This has been seen as a step towards the resumption of the IMF loan facility, which is said to have boosted investor confidence.

"Pakistan continues to inch closer to resuming the IMF programme," Jafri said, when asked to outline reasons for the rally in PSX.

Mehndi also cited speculation about the likely resumption of the IMF programme behind the positive investor sentiment, in addition to the "institutional support on falling government treasury bond yields".