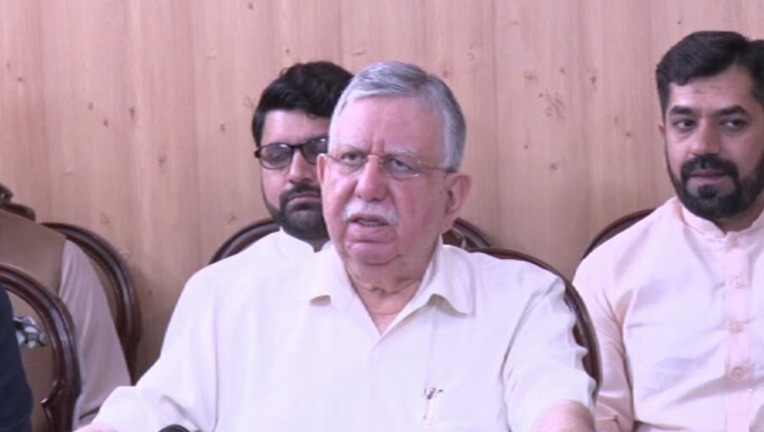 PTI leader and former finance minister Shaukat Tarin said on Wednesday that a potential deal with the International Monetary Fund (IMF) for the revival of the extended fund facility (EFF) was still weeks away as he lashed out at the current coalition government for its economic policies.

Speaking to the media in Islamabad, Tarin said: "We pray [an agreement is reached]. Because the country is ours and we are nothing without the country. We pray that they (government) agree on a deal [with the IMF] which does not burden the people."

However, the former banker maintained that this was currently a work in progress.

"Their (IMF's) statement says that this is a work in progress and there has been some headway [...] they are saying they will give the memorandum of economic and financial policy (MEFP) on Friday. When that has not been received, how can it be said that an agreement has been reached?"

Tarin said that the MEFP would be an extensive and detailed document, which would be deliberated upon and discussed "line by line". Then a technical agreement is signed which goes to the IMF's board in Washington, he said, predicting that the deal would materialise by July-end.

"But as I stated before, we want an indication that an agreement has been reached on broad matters as financial markets are nervous." He pointed to how the stock market plunged after initially making gains on Wednesday.

He went on to say that over the span of 10-12 weeks, the government had made several misstatements and changed its narrative which had affected its credibility with the financial market.

Tarin's remarks come after it was reported that Pakistan and the Fund had reached an understanding on Tuesday night on the federal budget for 2022-23, leading to revival of the EFF after authorities committed to generate Rs436 billion more taxes and increase petroleum levy gradually up to Rs50 per litre.

The government also agreed to do away with provisions for additional salaries and pensions, for which Rs200bn had been set aside as block allocation. Instead, a separate allocation of contingencies had been made but that would be strictly meant for emergencies like floods and earthquakes so that the amount remains unspent.

Pakistan also committed to deliver a Rs152bn primary budget surplus, which means the revenues would finance all expenditures — other than interest payments — and still leave Rs152bn surplus in the national kitty.

During the press conference, the former minister castigated the government's policies and warned that the country was headed towards a "serious economic crisis".

Talking about the government's negotiations with the IMF, Tarin said that the current rulers had discarded the economic policies of the PTI government which were progressive and involved broadening the tax base.

The PTI government had committed to collecting more taxes from retailers through point-of-sale machines, he said. Now, the government had gone for a fixed tax for retailers as that is their "constituency", he added.

He talked about how the PTI had made it necessary for retailers to ask for a person's ID card for purchases over a certain amount, lamenting that this condition had also been removed by the new government.

"They have gone back to purana (old) Pakistan. This means we will never go towards value added tax (VAT) mode. They have protected retailers in a massive way."

He also questioned how, under the commitment made with the IMF, the government would collect more than Rs400bn in taxes. "They will surely do what they have done before. They will impose more taxes on those who are already paying taxes."

He urged the government to focus on broadening the tax base, adding that the PTI government had identified 43bn people who were not paying taxes. "Be progressive!"

The PTI leader said that taking the petroleum levy to Rs50, which had never before happened in the country's history, would bring a storm of inflation. He predicted that inflation would rise to 35-40pc while economic growth would be between 1-2pc.

"So we are headed towards a serious economic crisis. They (government) take one step forward and then take two steps back." He said that the government's objective behind coming into power was to repeal electoral and accountability laws, not to combat rising inflation as it had claimed.