July inflation clocks in at 24.9pc, highest in 14 years 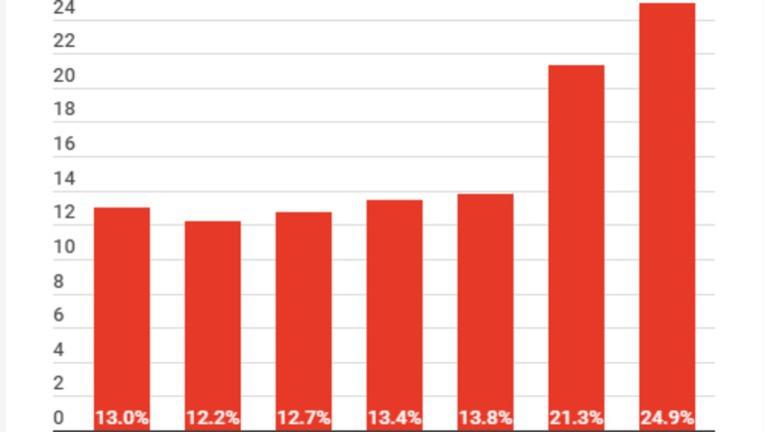 Inflation for the month of July, as measured by the Consumer Price Index (CPI), has clocked in at 24.93 per cent, the highest year-on-year rise since November 2008.

According to data shared by the Pakistan Bureau of Statistics (PBS) on Monday, inflation increased by 4.35pc compared to June when it was recorded at 21.3pc.

Inflation was measured at 23.6pc in urban areas and 26.93pc in rural areas.

Other than education and communication, which saw inflation at 9.79pc and 4.09pc, respectively, all other sectors saw double-digit increases.

According to the PBS press release, the prices of motor fuels rose as high as 99pc year-on-year, followed by electricity at 86pc and liquefied hydrocarbons by up to 51pc.

Among the food items that saw the highest price increases compared to last year were pulses, onions, ghee and cooking oil.

Earlier this week, the Ministry of Finance said in its Monthly Economic Update and Outlook for July that the year-on-year inflation, which has remained in double digits since Nov 2021, would continue in July and hover around the level observed in June (21.3pc) due to the increase in international commodity prices, particularly of energy, and the depreciation of the rupee.

The outlook said not only international commodity prices, especially oil and food prices, but the depreciation of the exchange rate influenced domestic inflation. It conceded that inflation mostly in the last two months was also coming from supply shocks, the impact of which has overshadowed government efforts in maintaining prices.

“Inflationary and external sector risks are building macroeconomic imbalances in the economy. Furthermore, the ongoing political unrest is increasing economic uncertainty, which is causing the rupee to depreciate and has an impact on the cost of production. All these factors are making the economic outlook uncertain.”