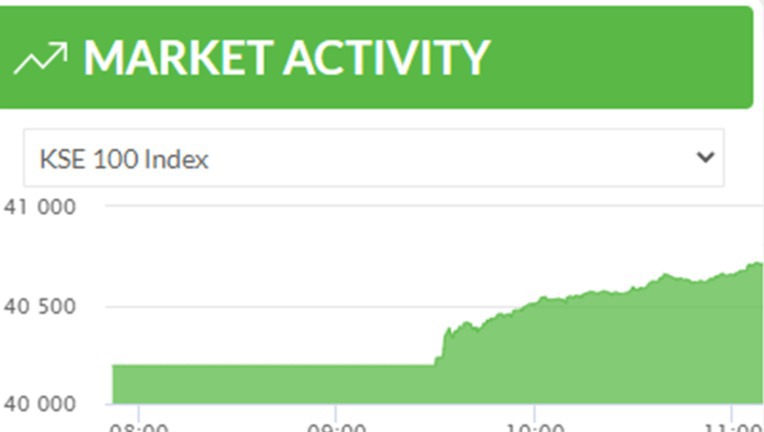 The benchmark KSE-100 index gained over 500 points during intraday trading on Wednesday as analysts said clarity regarding the International Monetary Fund (IMF) deal had led to fresh buying.

Topline Securities CEO Mohammad Sohail said investors were buying again because of falling crude oil prices in the international market and the expectation of the Fund releasing the loan tranche soon.

“Investors expect the rupee to strengthen due to lower imports and reduced trade deficit … large punters and financial institutions are active in the market.”

His view was shared by First National Equities CEO Ali Malik, who said investors’ confidence in the market had returned because of the IMF’s statement that Pakistan had fulfilled all conditions for the review and the board meeting at the end of August would approve the loan.

“The market had fallen to a very low volume last week because it did not know whether matters with the IMF would go ahead. There is clarity now because of which people have started buying again.”

Malik added that the market’s confidence had also risen because of the rupee’s gradual strengthening.

A day earlier, the IMF’s resident representative in Islamabad, Esther Perez Ruiz, said that Pakistan had completed the last prior action required for the Fund’s combined seventh and eighth review by raising the petroleum development levy (PDL).

“With the increase in PDL on July 31, the last prior action for the combined seventh and eighth review has been met. The [Executive Board] meeting is tentatively planned for late August once adequate financing assurances are confirmed,” she said in a statement.

Pakistan and the IMF signed the $6 billion bailout accord — Extended Fund Facility — in 2019. But the release of the combined seventh and eighth tranche has been on hold since earlier this year, when the IMF expressed concern about Pakistan’s compliance with the deal.

The last executive board consultation was held on Feb 2 this year. On July 13, the IMF reached a staff-level agreement on the combined seventh and eighth reviews for the EFF, which has to be approved by the board before it is disbursed.