PKR falls by Rs2.08 in interbank as dollar climbs globally 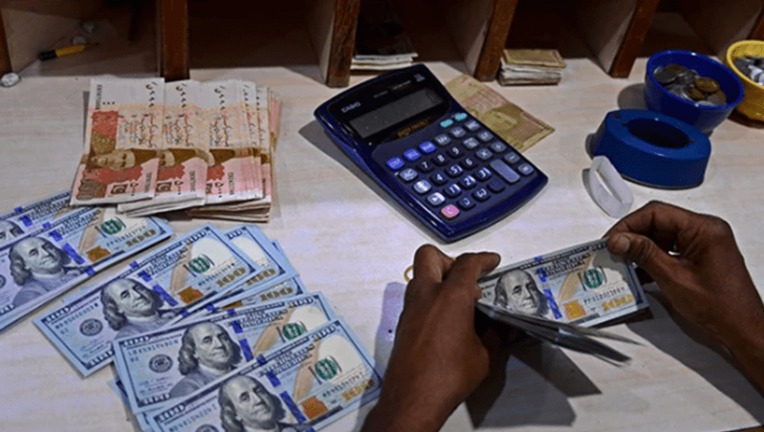 The Pakistani rupee continued to lose ground against the dollar for the ninth consecutive session on Wednesday, with the PKR sliding by Rs2.08 during morning trade in the interbank market.

The local currency was being traded at Rs234 per dollar at 12pm, depreciating 0.89 per cent from yesterday’s close, according to the Forex Association of Pakistan (FAP).

In the open market, the PKR was changing hands at Rs238 per dollar at the same time.

Saad bin Naseer, director of financial data and analytics portal Mettis Global, said the rupee “tumbled on the back of high inflation reading from the United States which bolstered the dollar in the international currency markets”.

Earlier today, the dollar climbed close to a 24-year peak against the yen after hotter-than-expected inflation boosted bets for even more aggressive monetary tightening by the US Federal Reserve next week.

The dollar index, which measures the currency against six major peers including the yen, euro and sterling, was little changed at 109.77, after surging 1.5pc overnight, its biggest one-day percentage gain since March 2020.

Naseer said the rupee was now “expected to find support as commodity prices remain on the declining trend which will ease off pressures on the current account bill for the month of September”.

FAP Chairman Malik Bostan said there were several factors behind the rupee’s decline, the biggest of which was the floods. “Prior to the floods, the exchange rate was stabilising, exports were reducing and prices of commodities were falling.

“But the floods caused widespread devastation, due to which the government has removed duties on the import of food items, relief goods and medicines. As a result, the import bill has risen significantly [and] there is pressure on the rupee.”

Bostan claimed that some traders were importing more items than needed so they could hoard and sell them once the duties were reimposed. “The pressure [on the rupee] in the interbank market will remain as long as duty-free imports are allowed,” he commented.

The FAP chairman said the rupee was also under “great pressure” in the open market. He cited two reasons for this — (i) traders had to make dollar payments in cash to exporters in Afghanistan and Iran and since banks in those countries had been put under sanctions by the US, Pakistani traders had to resort to purchasing the greenback from the black market and (ii) the condition for both inbound and outbound passengers to submit a currency declaration form.

People who possessed credit cards were not declaring currency on arrival and then later buying dollars from the interbank market which had led to two different rates being quoted, he said, adding that the condition of having 5,000 dirhams for UAE-bound passengers was also contributing to the pressure on the exchange rate.

“We expected that the dollar would go below 200 after the International Monetary Fund deposit … the floods have dashed those expectations.”

Bostan called on overseas Pakistanis to send back more money to their relatives in the country and suggested the government “strengthen its voice” in the United Nations and ask for reparations for losses caused due to floods from countries contributing most to climate change.

The rupee has been losing ground against the dollar since Sept 2. It fell by Rs9.2 during the last week to close at Rs228.18. In the last two days, the rupee’s value has further declined by Rs3.74.