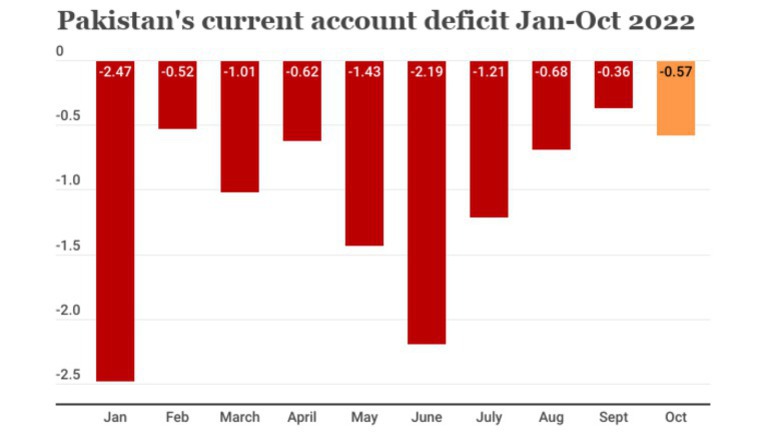 The current account deficit shrank 68.13 per cent year-on-year to clock in at $0.57 billion in October, data released by the State Bank of Pakistan (SBP) showed on Monday.

On a month-on-month basis, the deficit increased by 56.2pc from September’s figure of $0.36bn, which had been the lowest level since April 2021.

The data showed that the deficit during the first four months of the current fiscal year stood at $2.8bn, narrowing 46.82pc from $5.3bn during July-October 2021.

The month-on-month rise in the current account deficit is in contradiction to Finance Minister Ishaq Dar’s statement last week saying that it was expected to be below $0.4bn.

Dar said the deficit was under strict watch and being monitored and managed for the sake of national interest.

“The current account deficit was at $316m in September and expected to be below $400m in October,” he said, adding, “If this continues at the same pace, it will be around $5-6bn for the year, (while) the projected was $12bn.”

The finance minister reassured that the deficit was not at a concerning level.

Pakistan posted a massive current account deficit of $17.3bn in the previous fiscal year, or a monthly average of $1.44bn.