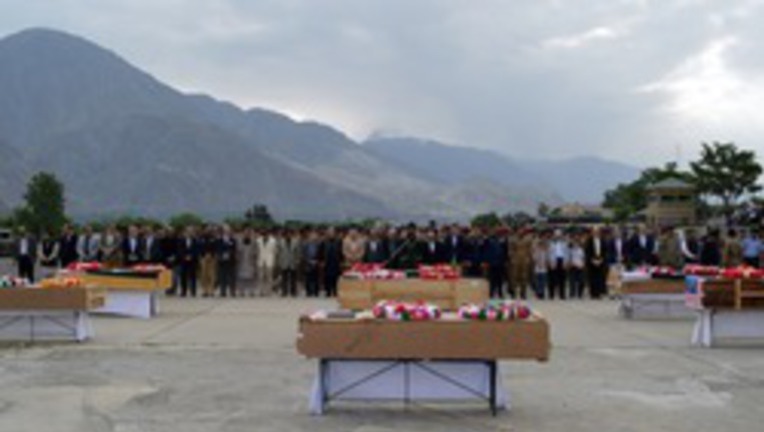 ISLAMABAD: The bodies of those killed in Friday's helicopter crash in Gilgit-Baltistan's Naltar Valley were brought to Rawalpindi's Nur Khan Airbase on Saturday.

Chief of Army Staff (COAS) General Raheel Sharif and senior civilian, military and air force officials were present at the airbase when the bodies were flown in from Naltar.

Twelve people injured in the crash also arrived at the military base outside of Islamabad in a C-130 plane.

Army personnel formed a guard of honour to receive the coffins, draped in national flags and bedecked with wreaths, as soldiers carried them from the aircraft that brought them from the north.

The commanders saluted as the coffins were carried by.

The casualties were then shifted to the Combined Military Hospital (CMH) in Rawalpindi.

Preparations have also been made to send the bodies of Ambassador of Philippines Domingo D Lucenario Jr, Ambassador of Norway Leif Larsen and the wives of the Malaysian and Indonesian ambassadors, who were among those killed in yesterday's crash, to their home countries.

“This is a moment of grief. All the bodies have arrived. We are in touch with the embassies” of the dead foreigners, Foreign Secretary Aizaz Chaudhry told Pakistan Television.

Family members of the slain envoys and their wives were also present at the airbase.

The bodies were flown to the airbase a day after the Mi-17 chopper crashed, reportedly due to a technical fault during landing.

There were 19 people on board the helicopter, which included 12 foreigners, two military officers and five members of the crew.

Two pilots of the Pakistan Army and a crew member were among those killed, who the Foreign Office later identified as Major Altamash and Major Faisal, and Subedar Zakir respectively.

Ambassador of Indonesia Burhan Muhammad was reported to be in a critical condition with 75 per cent burns.

The dead and injured and other diplomats, who had travelled to Naltar, could not be brought back on Friday because of inclement weather in Gilgit in the afternoon.

This was the most tragic air accident for the Islamabad-based diplomatic corps since the 1988 death of the then US Ambassador Arnold Raphel, along with then President Ziaul Haq, in a C-130 air crash near Bahawalpur.

Prime Minister Nawaz Sharif extended condolences on the demise of the two ambassadors and the spouses of two other envoys who died in the crash and declared one day mourning in relation to the incident.

The prime minister on Saturday called Malaysian premier Najib Razak to convey his condolences over the death of Malaysian ambassador's wife, a statement from his office said.

Sharif contacted the Prime Minister of Norway on Friday to extend condolences on the death of Norwegian ambassador to Pakistan. The “entire Pakistani nation is heartbroken on the incident,” he told the Norwegian prime minister, according to a government statement.

The seriously injured Ambassadors of Indonesia and Netherlands have been shifted to burn center in Kharian, while others are under treatment at CMH in Rawalpindi.

Meanwhile, “The mortal remains of the deceased have been placed in the morgue of CMH, Rawalpindi and their DNA tests are being conducted," Foreign Secretary Aizaz Chaudhary told Dawn.com.

He confirmed that due to DNA testing the transportation of mortal remains of Norwegian Ambassador and that of the wives of Indonesian and Malaysian ambassadors may take another 48 hours.

Transportation of the mortal remains of the deceased to their respective countries would be finalised after consultation with the families and officials of the concerned Embassies and after completion of all formalities, the foreign secretary added.

Forensic teams from Norway and Indonesia will be arriving tomorrow to help Pakistani doctors in carrying out the DNA tests. Moreover, Dutch Ambassador Marcel de Vink will be flown back to Netherlands on Monday for further treatment.

The funeral was attended by the heads of the three armed forces: Chief of Army Staff General Raheel Sharif, Chief of Air Staff Sohail Aman and Chief of Pakistan Navy Admiral Zakaullah.