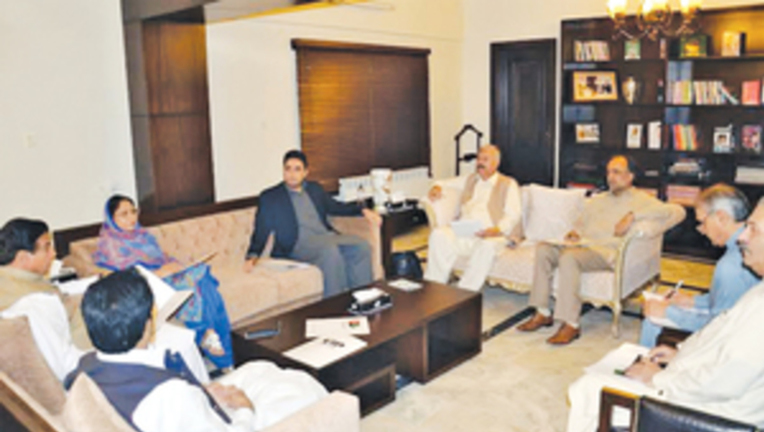 ISLAMABAD: PPP chairman Bilawal Bhutto-Zardari on Friday asked members of provincial coordination committees tasked with reorganising the party and restoring its past image in the wake of its crushing defeat in three provinces of the country except Sindh in the last general elections, to ensure only a merit-based selection of office-bearers of the party.

Presiding over a meeting of members of PPP’s Coordination Committee belonging to central Punjab at the Zardari House here, Mr Bhutto-Zardari urged committee members to leave aside personal liking and disliking while making recommendations for reorganising the party and select only the best team of workers to run the party in the new era.

The meeting lasted two and a half hours in which matters related to the party’s reorganisation were discussed.

In several recent media reports, a large number of PPP leaders and workers had criticised the party’s Punjab leadership and expressed dissatisfaction over the appointment of Mian Manzoor Wattoo by former president Asif Ali Zardari.

Mr Bhutto-Zardari took a major step of reorganising the party in Punjab and other parts of the country by dissolving all party organisations on April 13.

During Friday’s meeting, Mr Bilawal said that history had placed a heavy responsibility on new coordination committees and these should work hard and have a close collaboration and coordination with workers to create vibrant organisations to meet political challenges faced by the party and the entire nation.

“Being the torch-bearer of democratic struggle and values, the PPP stands out as the sole representative of the collective aspiration of whole nation in every nook and corner and segment of the masses,” Mr Bhutto-Zardari said.

Tariq Naqash adds from Muzaffarabad: PPP chairman Bilawal Bhutto-Zardari will formally kickstart an election campaign of his party by addressing a public meeting in AJK on Saturday.

“The young and charismatic PPP chairman will address a mammoth gathering in Kotli during his first-ever visit to the land of PPP devotees,” said Shaukat Javed Mir, party’s media adviser, in a reference to AJK where the PPP has been ruling since July 2011 amid allegations of bad governance.

“The historic gathering will be the formal launch of the campaign for the victory of PPP candidates for upcoming general elections to the Legislative Assembly,” he claimed.

Kotli is the same district where an elderly PPP activist was killed and four other people were injured in a clash between workers of the ruling PPP and the main opposition PML-N on Feb 13.